I was planning to pick up Chinese food after the Festival of Lights, but was saddened to discover that the restaurant is closed until the end of January. I came up with a Plan B* for dinner that night (you know I always have one), and faithful readers will not be surprised to learn that this resulted in my making it my own self.

My intended menu was char siu, aka Chinese BBQ pork, lemon chicken (which I consider to be comfort food), and fried wontons. So that weekend, I set the char siu to marinating, red food coloring and all, and consulted with my long-serving friend A, who is Chinese, about producing my own lemon chicken. She sent me a simple, yet delicious recipe, which I only modified by adding lemon zest to the sauce:

Slice the chicken breasts in half butterflied into two thinner pieces each.
To coat the chicken add the egg, salt, pepper and oil into a bowl and whisk together in a large bowl.
In a separate bowl, add ½ cup corn starch and ¼ cup flour and mix well.
In a large frying pan or a wok, heat more canola oil in a wok 375 degrees (medium high heat).
Dip chicken pieces in the egg mixture, then dredge in the flour mixture.
Fry the chicken for 3 to 4 minutes or until golden and crisp.
Remove the chicken from the pan, then drain the oil.
Add the lemon juice, sugar, water and remaining 1 tablespoon cornstarch to the pan and whisk to combine.
Cook until thickened and smooth.
Slice the chicken into thin strips then serve with lemon sauce poured over.

So I was able to successfully reproduce the meal at home. Unfortunately for my sloth-like tendencies, I’m sorry to say that it was probably better than I would have gotten in the restaurant had it been open.

Not that I’m saying that the lack of Chinese food – or at least, Chinese food made by someone other than Me – drove me to drink, but I did find myself perching on the stool at the foot of the bar near the door to the deck not too long afterwards. Megan and I had both had a trying week, and decided that we needed a drink: 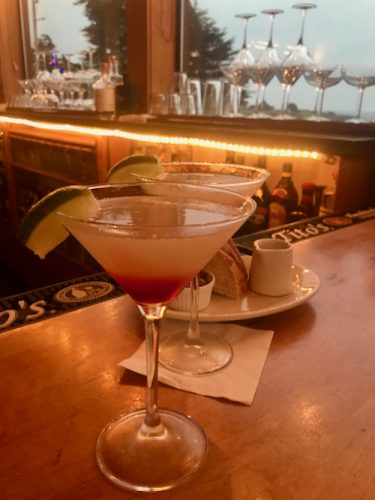 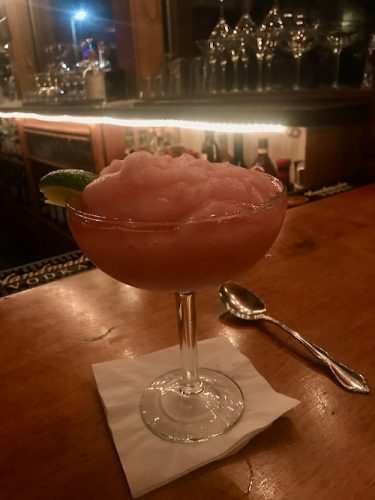 I thought the Cranberry Margarita sounded festive, and as you can see, it is about the size of a young swimming pool. It came with a spoon to aid in imbibing this adult slushie.

*Plan B was leftover penne alla vodka, which I had made myself when I learned that Luna no longer does take out. This seems to be my go-to when foiled by local restaurants, or the lack of them.

A YEAR AGO: A different kind of online dating.

FIVE YEARS AGO: A day at the beach.

TEN YEARS AGO: Shock and awe at the incredibly beautiful lunar eclipse, shot through with a single shooting star. I later learned that my beloved former father-in-law left us at about the same moment. I like to think the star was him, saying goodbye. Love you and miss you, dear Ed.

TWENTY YEARS AGO: Walking to work in San Francisco, despite teh temptations of cable cars.