Things are changing over at Megan and Rob’s place.

They always wanted to change out the stairs they had, which were metal and hard for Megan’s reconstructed knee to deal with, as well as being slippery when wet, but they hadn’t gotten around to it until recently. They had extra motivation to get it done now – more about that later.

Rob and Jonathan made a design, measured, and acquired the wood and other essential building materials, like cement. Stain and sealant are yet to arrive, and Rob is still plotting the handrail, but all in all, it is basically done: 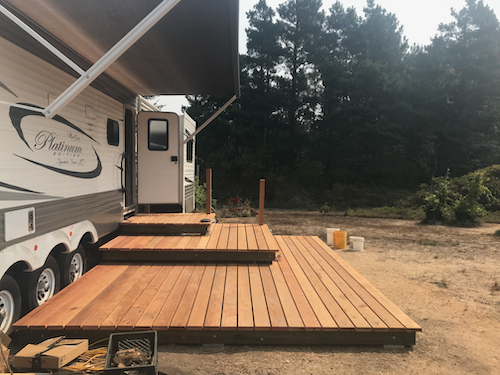 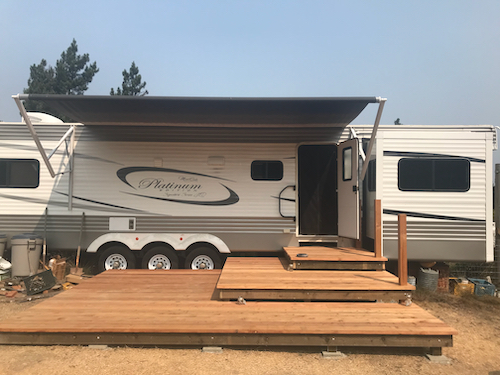 It makes such a huge difference! It is beautiful, for one thing, and it makes it much easier to get in and out of their place. There are plans to put a little bench to the left of the door, where one can put down groceries or one’s handbag, or even put on or take off shoes. As you can see, that part is under an awning, and will stay dry during the winter rains (hopefully we will get our share and more this upcoming season).

They would also like to add a little path to the gate, to minimize the mud/dust being tracked inside. Maybe gravel, maybe paving stones.

It is an exciting development, as is the reason for the acceleration of the project. Megan and Rob are getting a new dog!

Her name is Millie. She is two years old, and Megan, Rob, and Stella all went to meet her in distant Sacramento recently. Sacramento is about 4 hours’ drive and 40 degrees hotter than it is on the coast. During their get acquainted visit, the temperature was consistently over 100 degrees, which is pretty much intolerable to us coastal dwellers. It’s not surprising that we get heat refugees from Sacramento and environs every summer.

The purpose of the trip was to make sure that Stella and Millie got along and that Megan and Rob felt that Millie was the right dog to join their family. Stella has been very sad since Star’s sudden and untimely death. While she no longer goes back every day to the spot where Star died, she has definitely lost her bounce and joyfulness. It’s very clear that she needs a friend and companion.

Every time I’m over there, I realize how huge Star’s absence is. She was truly the heart of their household. And if I feel that way, it must be really hard for Stella. Star was already there when Stella arrived, and they spent every day and night together for many years. That’s a huge loss.

It’s probably just as well that it took so long to find Millie. Megan and Rob weren’t really ready for a new dog when they started looking, but they felt so bad for Stella that they did it anyway. They finally came across Millie, and after a rigorous adoption process, they have almost officially adopted her!

Millie will arrive the last week of August. The adoption team will bring her and take a look around to make sure everything looks good before Millie officially joins the family.

Millie was born without one of her leg bones, as you can see in this photo: 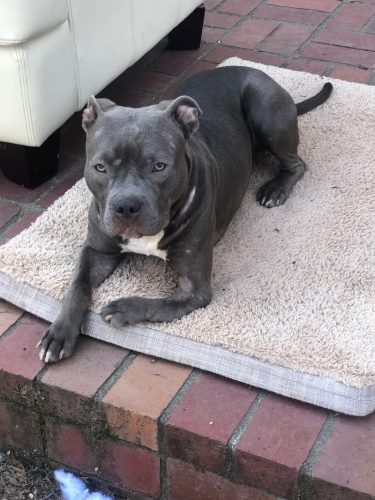 So she could not have managed the old steps, or at least, it would not have been easy. This way, she will easily be able to go in and out. And as you can see, she is a mini Stella, so they will be an adorable matched set.

We are all looking forward to Millie’s arrival!

A YEAR AGO: ‘Tis the season. For naked ladies and peaches.

FIVE YEARS AGO Enjoying family dinner together. And the fruit of the season.

TEN YEARS AGO File under miscellaneous.

TWENTY YEARS AGO: An unusual reunion