I love canelés de Bordeaux. When I lived in San Francisco, I used to buy them at the French bakery on Polk Street, a charming place with little green metal tables on the sidewalk under a striped awning and delicious delicacies inside. Of course, this delightful place is long gone, along with the French lingerie shop, Polk-Vallejo Market, and the combination shoe repair and tailoring establishment run by an elderly Italian couple who used to have lunch together at a table on the sidewalk every day, complete with a glass of wine and their dog napping peacefully at their feet. They are part of the San Francisco I loved, now lost to time and encroaching soullessness. I feel lucky that I lived in the City when the neighborhoods had distinct characters and it wasn’t all rich people and Starbucks.

Here in distant Hooterville, the closest place to get a canelé fix is at Franny’s Cup & Saucer, an hour’s drive from Chez Suzy, and they don’t always have them. I did pick some up on my way to Bodega Bay recently, and as I enjoyed its distinctive crust and creamy interior, I began to wonder if I could make them myself.

Locating a recipe on the ever-helpful interwebs, it didn’t look very difficult, though special equipment was required, including the pan and food-grade beeswax, which is apparently essential for getting the dark, crispy outer shell. Once I obtained these items, I ventured on my first batch ever of canelés.

I used my prettiest kitchen equipment to inspire me: 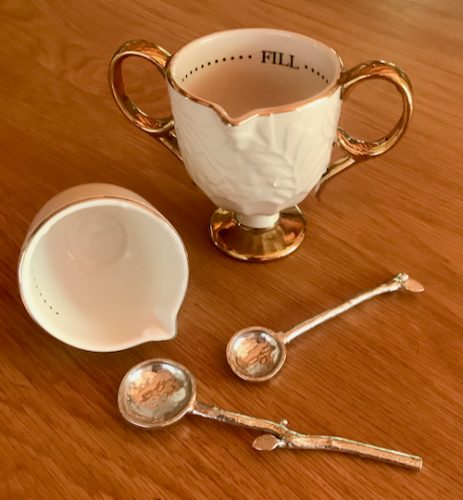 The trophy measuring cups were actually useful as well as pretty, especially since I used the smallest one to pour the batter into the molds. Before long, the house was filled with the distinctive scent of canelés. As I took them out of the oven, I thought, “They look pretty convincing”: 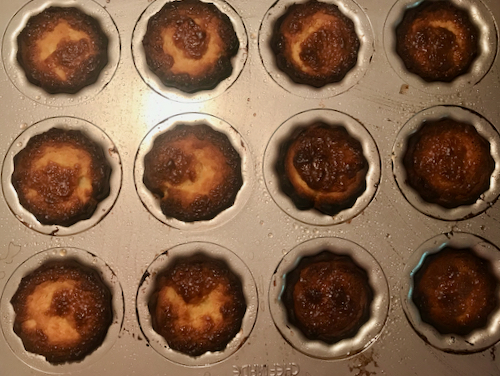 The recipe said to unmold them while they were hot to keep the crust crisp. If you leave them in the molds while they cool, they will sort of steam and become soft. They unmolded easily: 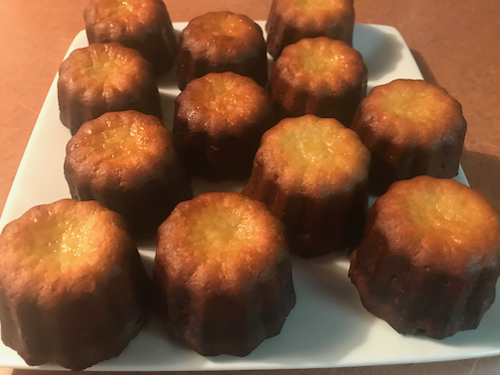 When I was ready to test one, I was pleased to see that the inside was appropriately custardy, while the outside was crispy and caramelized: 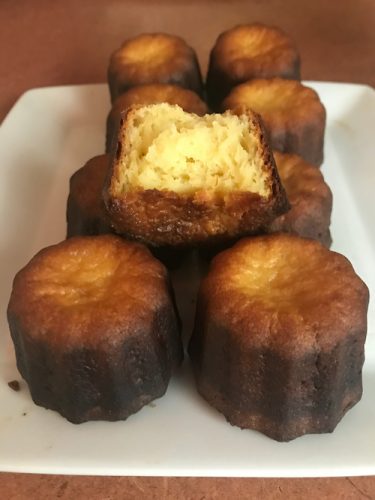 The hardest part was dealing with the beeswax and butter mixture, which is used to brush the molds before pouring in the batter. You have to do it quickly, before it hardens, and then cleaning the pan you melted it in, the pastry brush, and eventually, the pan you baked the canelés in is not easy. Getting buttery wax off dishes is challenging. But it was all worth it.

A YEAR AGO: Things were rocking and rolling in the family garden.

FIVE YEARS AGO: Another look at the local message boards.

TEN YEARS AGO: My attempts at gardening.

FIFTEEN YEARS AGO: It’s here. The official Month of Death.