I took a couple of days off and decided to leave the County for the first time in four years. I am no longer the jet-setter I once was, when I used to fly to Europe at least once, and often twice a year, venturing as far afield as Russia. Now, I can’t remember the last time I went to San Francisco. This formerly urban girl has become a total bumpkin. This only became more clear to me as the trip went on.

The first stop was Bodega Bay, in neighboring Sonoma County. We used to go there for Christmas when Dad came for Christmas. He and Margaret would rent a house there, since it was partway between San Francisco (where I lived then) and Mendocino (where my brother and sister lived then and now), and we could wake up together on Christmas morning.

The last time I was there was in 1999, the last time Dad spent Christmas and New Year with us. But I used to drive north from San Francisco, almost as glamorous as Tippi Hedren in my 1966 silver-blue Mustang convertible. This was the first time I had driven south to Bodega Bay, along the scenic, though sometimes alarming Highway One. The highway runs along the ocean, and climbs precipitously, descends steeply, and winds like a snake while doing it. For extra fun, long stretches of this narrow two-lane blacktop have no guard rails on the ocean side, allowing one’s imagination to run wild with what could happen if a girl was insufficiently careful.

Fortunately, my worries were for naught, even though I would play for America if worrying were an Olympic sport (and why isn’t it? Everything else is), and I made it to Bodega in one rather relieved piece. Perhaps not surprisingly, there were many more houses than there were the last time I was there, though I did recognize many landmarks. The view was unchanged: 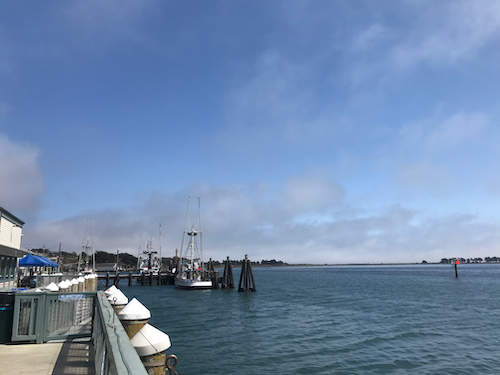 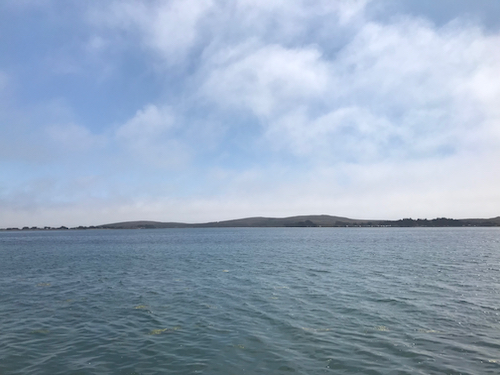 I was a little surprised by how emotional it was, being there. My intent was really to visit the few remaining landmarks from “The Birds” rather than to reminisce over the past, but it was impossible not to think about Dad and all those long-ago holidays. I’m glad we had that time together as adults. Also that I made a point of visiting him at least once as year. It amazes me that he has been gone for 20 years. And that I survived that loss. At least on the outside.

I headed inland toward the even smaller town of Bodega, putting the past behind me. In a short time, I arrived at the schoolhouse that featured in the movie: 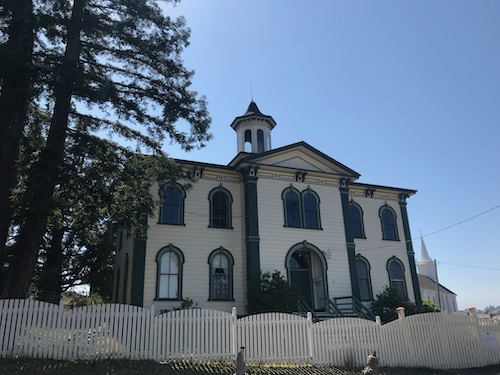 It is now a private residence, and it must be quite tiresome for the residents to have people like me showing up and taking pictures of their home. It was built in 1883 and was a schoolhouse for many years: 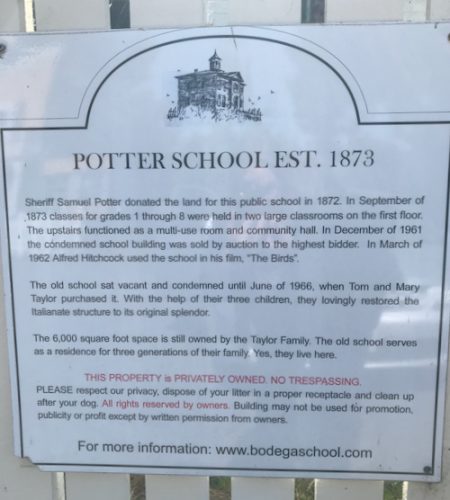 It is unchanged from the movie, as far as I can tell, and you can see a little peek at the church which also had a bit part in the movie just to the side of the house.

After that, I headed further to east to Santa Rosa, which was also the place I went the last time I left the County, four years ago. But this time, I was staying overnight, and in a splendid resort, too.

A YEAR AGO: Not a tech fan.

FIVE YEARS AGO: Power was out at work, and the fabulous Predicta made its first appearance in our lives. We are overdue for a Predicta evening!

FIFTEEN YEARS AGO: Who needs Dear Abby when you have Dear Suzy?