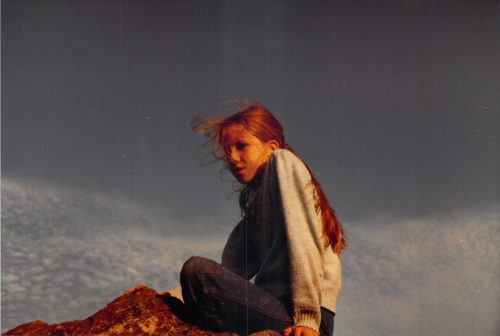 It’s hard for me to believe that the little baby who came home from the hospital on my 9th birthday is half a century old on this day. I still remember being called to the office on that bright spring day. I felt so small as I walked down the empty, echoing school hallways*, reviewing my recent crimes in my head and then sorting them by the ones I thought I could have been caught at. I had reached no conclusion by the time I reached the principal’s office.

My criminal musings were ended by the school secretary cheerfully informing me that I had a baby sister. I skipped back to my classroom, slammed the door open, and announced the happy news, which was greeted by “Yay!” from the girls and “Boo!” from the boys.

My first glimpse of my sister was when our parents brought her home from the hospital on my birthday. She was wrapped in white blankets, and was so small! It seemed I had to dig around in the blankets for a while before I found the baby. We were excited that she was a brunette after the rest of us were blonde.

Despite my youth, I took care of Megan as a baby, giving her bottles (she was allergic to formula, and drank soy milk) and changing her and doing the laundry. I was surprised that the smallest person in the family had the most laundry. All those cloth diapers and onesies! I remember the first time she laughed. She was in her playpen, watching the snowball bush outside the window dancing in the breeze.

Megan lived with me during high school, and I had to make decisions about her boyfriend** staying over, how late she could be out, birth control, and minor things of that nature. Don’t forget that I was a mere 9 years older and in my early 20s at the time. There’s a reason that Nature generally does not allow parents to be so young. Looking back, I think I did a pretty good job of fake parenting, and I like to think that I had a little something to do with Megan becoming the amazing person she is today***.

I am so proud of her for living her life with integrity, humor, and love. She has worked in emergency medical services for almost 20 years, and if the shit is hitting the fan, if you have been in a car accident or your loved one is dying or you are giving birth, she is the one you want to have there. She is the best person to be there on your worst day. She is calm, decisive, and commanding, whether driving the ambulance or working in the ER. She takes no nonsense, but she treats patients with respect and compassion. She is beloved by her team at work, where they are like a family. Facing the drama and the long, dark nights together, when things tend to happen, brings you close, like being in battle. And in a way, they are.

She has been married to Rob, our brother’s best friend, for 30 of her 50 years****, and they have grown and supported each other together over the years. The good times and the bad times have just made them closer. As Megan says, whatever life throws at them, they just hold each other’s hands and walk through it together.

With our brother, Megan and Rob have homesteaded their property, living off the grid, digging their own wells, and creating a beautiful vegetable garden, flower garden, and orchard out of inhospitable pygmy. My sister has achieved a lot in her half century on this planet, and I for one can’t wait to see what the next 50 years bring. I am so proud of you, baby sis! And I love you with all my heart.

*Years later, when Megan was in high school and living with me, I would find going to her “parent”-teacher conferences equally intimidating. I always felt like they were going to make me go back to school, since I was clearly impersonating a responsible adult.

**When asked in job interviews what my greatest achievement is, I always think, “Megan”. Though I never say that. Now you know the truth!

****And without our beloved father for 20 of her 50 years. She was out of parents before she was 35. Have you called yours lately?

A YEAR AGO: I know a lot of secrets.

TEN YEARS AGO: A rainy birthday for Megan. I see I did not not note it was her 40th.

FIFTEEN YEARS AGO: The joys of almost dog ownership. I still miss the Lovely (and dignified) Rita.

TWENTY YEARS AGO: Feeling proud of Megan on her 30th birthday.