John’s kittens have been growing by leaps and bounds. They are now 6 months old, and were recently spayed. As might be expected, shy little Daisy was more horrified by the entire process than bold and brave Peach, but they both went running to Mom for comfort when they came home from the vet wearing mini cones of shame. 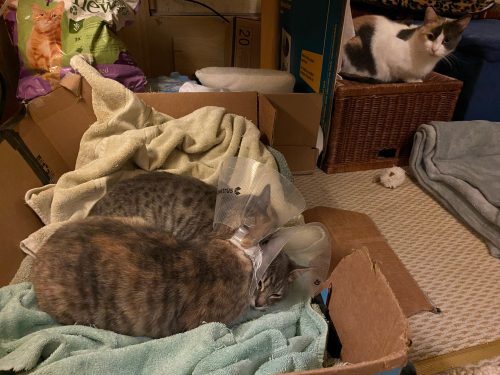 I have never had the experience of having a mother cat and her children in the same household. I think in the wild, the kids would be independent of Mom and possibly each other. But all living inside in the same house, they have stayed close and still cuddle. Willow still keeps a watchful eye on her progeny:

It must be so fun to see that dynamic. I hope it stays that way.

John and I disagree about whether they are still kittens. I say yes, and he says no. I think they are kittens until their first birthday. They are definitely looking more like cats than kittens these days, though.

As for my boyfriend Frank, he visits John daily. Their relationship has grown as fast as the kittens. At first, it was just for food, but now Frank lets John pet him. And gives him head butts, a sure sign of affection. He used to have sore eyes, which John has treated and improved, though he seems to get into fights occasionally, based on various wounds that have appeared from time to time. I think it’s all part of his rakish charm. 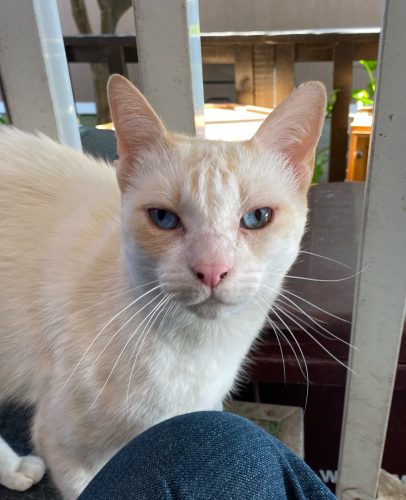 We don’t know where he sleeps, but even when it rains, he is dry when he turns up chez John for pets and food (now in that order). A happy Frank makes me happy, too.

Stella, on the other hand, is not happy. She misses Star so much. We all do. Stella did have a happy moment last week when a friend of Megan’s brought her dog Cooper over to play. Stella seemed like her old self again. It was really nice to see.

Megan is beginning to think that she needs to find a companion for Stella sooner rather than later, even though the humans in the house may not necessarily be ready. Megan has a line on a male foster dog who might be right for their household. You know how Stella loves the boys. Stay tuned!

A YEAR AGO: A well-traveled clock.

FIVE YEARS AGO: Nothing like having dinner made for you by someone else, I always say.

TEN YEARS AGO: A was recovering from her 3 month long hospital ordeal. She has never been the same, but I am still thankful that she is still with us. We email nearly every day.

FIFTEEN YEARS AGO: I still love this vase, made by the talented and handsome Aaron Oussoren. You can see more of his work here. As for the vase, it’s currently residing next to my TV, giving a welcome pop of color to the room.