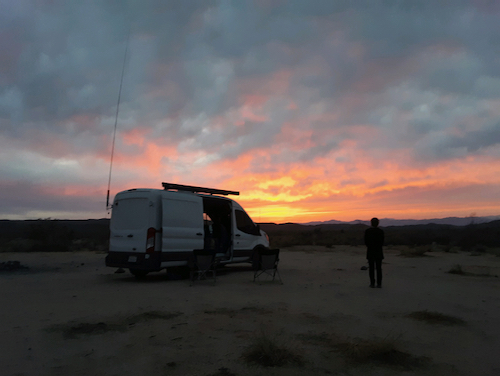 Jonathan and Rio are off on an adventure, camping in their van. They started out in the desert, and I thought you might enjoy hearing about their adventures, which he somehow emails to us via radio. That, and things like getting the Predicta working, are above my pay grade and intellectual capacities. I will just say that I am happy to hear from them on the road and am also enjoying the pictures.

After a too short but lovely visit with the L.A. crew we headed out on the road trip proper. We got off the highway at Baker, CA, and immediately were on a road less traveled. Our objective was to find the cinder cones we had seen on the map. After about 20 miles or so we saw them and began to look for a spot to camp. We found a great little spot and got Moby[their camping van, seen above] parked. Naturally we wanted to go investigate the cinder cones in the distance so off we went. (with the coordinates above you can find the very cinder cone we climbed!)

Cinder cones are what is left from where the molten core of the earth spewed molten lava. They are the simplest type of volcano where there is just a single vent for the lava to follow. The ones here are just a few hundred feet tall. As we started hiking towards the cinder cone we saw that all the rocks here are the volcanic type. When you look at them you can see they were once liquid and that as they dried gas was escaping. They are blob-like and have many little holes from the escaping gases. We will bring you some to see. Holding these rocks you can just imagine the ancient past: The cinder cones spewing forth red hot lava, thick smoke everywhere. Liquid rock raining down, hardening as it falls. Dinosaurs rampaging and stalking around, fiercely roaring. Primitive man, dressed in leopard skin loincloths, armed only with spears, desperately hunting the T-Rex hoping to avoid becoming dinner while getting some for themselves

Oh wait. Man and dinosaurs were never on the earth at the same time. And probably there were no T-Rex around here either. Still, it makes a great image to think about as you contemplate the volcanic rocks. We continued to hike and got to the base of the cinder cone. There is the remains of a road going up the cone, left over from some sort of mining operation in the past. It isn’t easy to climb as the small volcanic rocks make a sort of large sand and are pretty slippery. We worked our way up until we had a nice view of Moby off in the distance. We headed back down, got to Moby and began to settle in for the night. We got the antenna up, the tables and chairs out and made dinner. Which was chicken cacciatore, chicken thighs browned and then simmered in our garden sauce, served over rice. Yum!

This morning, delightfully, we don’t really know where we will end up later. Somewhere within the Mojave preserve, we shall just have to see what we see. Until then,

A YEAR AGO: My traveling companions

TEN YEARS AGO: The horror of the Japanese earthquake and tsunami.

FIFTEEN YEARS AGO: A slight improvement.