The moon was huge and blazing orange this morning. I wondered what the light was through the dark trees, and it turned out to be my old friend the moon. She was so beautiful that I actually gasped out loud. By the time I got to the ocean, I could barely see a glimpse of her as she slid into the fog bank above the water, so I couldn’t take a picture. Not that I have ever taken a good picture of the moon.

As I drove down the darkling Ridge this morning, an owl swooped low in front of my car, perhaps in search of an early breakfast. I instinctively ducked – as if my lowering my head inside the car would help! – and also braked, and we both emerged from the encounter unscathed. I love owls. If I had a totem animal, I think it would be an owl.

I also saw a group of young deer heading home after being out all night. It’s the baby animal time of year. It’s definitely spring now. The trees are leafed out in that translucent green they only have in spring, the California poppies are unfurling their bright orange blossoms by the side of the road, joined by spiky purple irises. The magnolia blossoms at the library have been replaced by lilacs, my favorites.

Despite the beauty of the season and the hopefulness it typically brings, we are still feeling sad at the loss of Star. Stella has been taking the loss of her companion harder than we expected. Stella is normally such a happy-go-lucky dog that we didn’t expect her sadness, though when you think about the fact that they were always together: 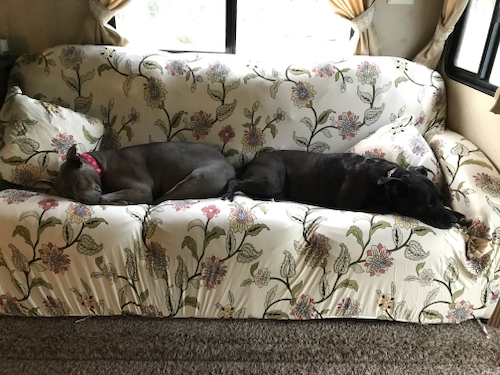 And that this change is as big in Stella’s life as it is in Rob’s and Megan’s, it only makes sense that big, goofy Stella is also grieving. For several days after Star’s death, Stella went back to the place she died and sniffed it. She also sniffed where Star used to sleep and eat. I guess we are all adjusting to the After phase of our lives.

Megan is making an effort to take Stella out to meet other people and dogs. She has always been super friendly, but Star was reserved and suspicious of strangers, so it was best for her to stay home, so that meant that Stella stayed home, too. But now she can walk around the Village and enjoy the attention she invariably gets, as well as the view from the Headlands: 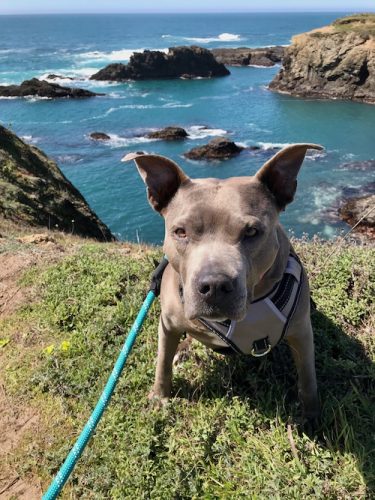 Megan is planning to have Stella meet some friends’ dogs and perhaps take some classes as well. You may remember that she passed her Canine Good Citizenship class on the first try, though she might need a refresher course.

Megan and I enjoyed a night of GirlTV™ (Emily in Paris! Where is Season 2 already?) and GirlTalk™ (Tales from the ER!) last weekend. We are lucky that Rob is so tolerant of both these things.

A YEAR AGO: You can bring a girl to Michelin-starred food, but you can’t make her eat it.

FIVE YEARS AGO: Setting up the grandfather clock and remembering its history.

FIFTEEN YEARS AGO: Jump in the wayback machine with me! We’re going to Italy, circa 1984.