Star was feeling under the weather, and then she started gagging and making coughing noises. A concerned Megan took Star to see Dr. Karen, and tests revealed that Star secretly had cancer somewhere – we don’t know where – which has spread into her lungs, which was causing the coughing and gagging.

This was a staggering blow to Megan, who adores Star and assumed she had a few more good years with her beloved companion. Faithful readers may recall the Great Dog Rescue Adventure, eleven years ago next month, when Megan and I spent the day driving to Colusa to pick up Star and bring her home with us. I think it was around 8 hours of driving.

I also think Star knew that Megan was her person, even though Megan didn’t. When we went to get Star, we thought that Megan would foster her until a permanent home could be found. When we stopped to get gas, Megan went inside the gas station, and Star immediately jumped into the front seat, her eyes glued to where Megan had last been seen. They had only known each other for a few hours at this point, but Star had clearly decided that Megan was her mama and that was it. To this day, Star still does the same thing if Megan leaves the car with Star in it.

Star’s original owner jumped off the cliffs into the ocean and Star tried (and failed) to rescue her, despite the fact that the owner was, to say the least, not kind to her. Star was sent to live with the owner’s boyfriend, who kept up the tradition of treating Star very badly indeed, so we were glad to take her away from all that.

She certainly happily hopped into my car that day, and I truly believe that my being there when her bad old life ended and the new fabulous one began has never been forgotten by Star. No one is ever as happy to see me as Star is.

I have been stopping by on my way home to visit with Star while we still have her. She is on Predisone, which seems to be helping. Her breathing sounds a little weird, and she is subdued. She is still happy to see me, her tail wagging excitedly, but she is not as bouncy. I think both she and Stella know what is happening. Maybe they can smell it or something. Star is lying close to Stella, and Stella is bathing her and generally fussing over Star.

But Star is still happy. She is riding in the golf cart: 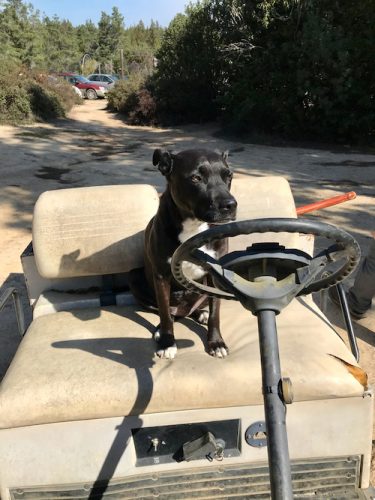 lounging in the sun with Stella, supervising in the greenhouse as spring approaches: 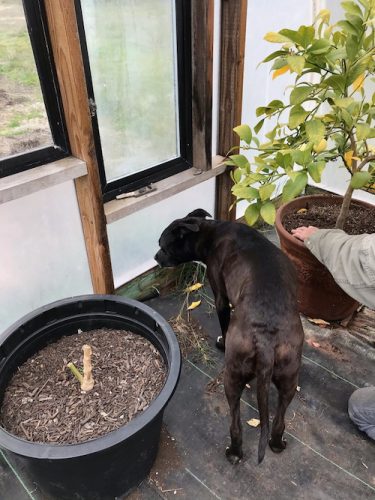 and providing that all-important quality control when Megan works at home (you can see Stella in the background): 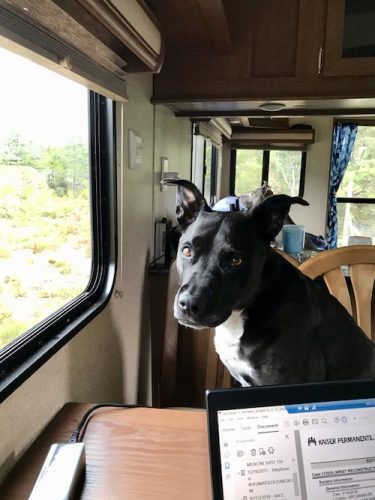 We don’t know how long we will have with her, but we will enjoy every moment.

FIVE YEARS AGO: A stormy day.

FIFTEEN YEARS AGO: A really bad case of the flu.