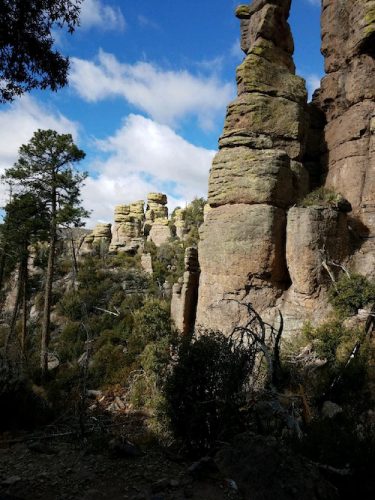 While we were happy to be on the road again, it was hard to leave the Kofa Wildlife refuge. Like the Mojave Preserve we have unfinished business there. We drove to Yuma to get groceries, water and fuel and got drive through at In and Out for the first time in well over a year! Fridge, gas tank and tummies filled, we headed out towards some petroglyphs called the Painted Rocks.

On the road out to the petroglyphs, there was a solar power plant with trough mirrors that super heat molten, liquid salts and them use them to make steam to run a turbine. They do it this way because they can put the molten salts in an insulated container to use when the sun is no longer shining. It is like a battery in a way with the energy stored as heat.

The petroglyphs were simply astounding: 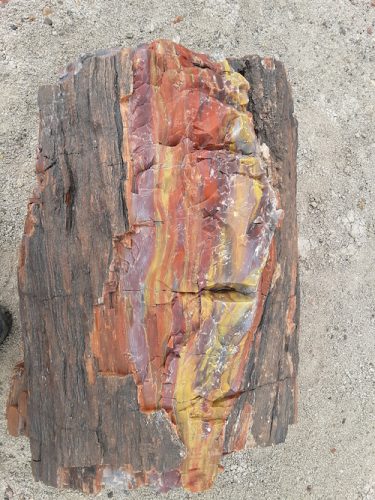 By far the most I have seen in one place, the rocks here are covered in them. The rocks seem to have a fairly thin dark layer on the outside and are much lighter in color underneath this layer. This is why the ancients chose these rocks to put their art and messages on because if you chip or scratch through the dark layer you expose the lighter layer and the contrast makes the design easy to see. You cannot help but wonder what was going through their minds and what they meant the designs to mean. While it was a long time ago, people then were the same as they are now, so what were these intelligent artisans trying to say?

As it got dark and I was setting up the antenna there was a light sprinkle of rain. A funny thing about a light rain in the desert is that you can stay out in it and never get wet! The air is so dry that the wind is like a blow dryer. You can feel the rain evaporating as it hits you. We had dinner and then it began to rain a little more. A half inch or so must have fallen during the night and yet everything was still pretty much dry in the morning, the parched desert drinking it up as fast as it fell.

In the morning we packed up and moved out. We had decided to go check out the Saguaro National Park. It has the most varied and lush vegetation I have ever seen in the desert. Ironwood trees, palo verde, more types of cholla than I knew existed and of course and absolute forest of saguaro. Usually in the desert plants are placed pretty far apart as there just isn’t enough water and nutrients to support more. This is obviously not the case in this very special place as the vegetation is almost as dense as a forest.

Speaking of cholla cactus, holy cow are there a bunch of different types here, some of which we had never met before. There is the stag horn cholla, which does indeed resemble the horns of a stag. There is the chain fruit cholla which is kind of bumpy and apparently has little mini grape like fruits after it flowers. Then we saw the pencil cholla which as the name implies has very thin, pencil like growth. While their outward appearance is very different you can tell they are all cholla and the one thing they all have in common is their viscous stickers!

Going on a tip from a friend we decided to go to Indian Bread Rocks. This is just south of the town of Bowie, AZ. It is the kind of obscure place that only the true desert dogs tend to find. It is BLM land so dispersed camping is fine. When we arrived, we found that there were a few other people here. They are all desert dogs. As we were making dinner (delicious frittata) Rio suddenly cocked her ear and said that she thought she heard a cow! Indeed she had and a small herd of cows began wandering through. They were all around a trailer a little ways down the road so we walked down to check them out and in the process met another very nice couple and had a laugh over the cow invasion. We stayed and chatted for a few minutes about boondocking subjects, like trailer VS vans, 4WD vs AWD and agreed it is all about compromises with pros and cons to each.

This morning when we woke up and started coffee we heard a very soft clattering on the roof. We went outside for a moment and there was snow coming down! Very strange as it was sunny and about 45 degrees out, not very cold at all. Of course the snow was melting and evaporating instantly when it hit the ground. It is peculiar how any kind of moisture just disappears in the desert.

When we were climbing Teutonia Peak, I saw a hawk diving down at incredible speed, without a doubt going in to make some hapless critter dinner. How they don’t slam into the ground I just don’t know, they are incredible acrobatic fliers. We were at a gas station and there were some tropical sounding birds making all sorts of noises and calls, up in the palm trees. And just last night as dusk was giving way to night the small birds in the trees near us got very chatty with each other, twittering and calling and making silly noises. I think it is their way of saying goodnight to each other as they only kept it up for 15 minutes or so.

Today the plan is to head over to the Chiricahua monument because the rock formations there are so crazy and unique. Stay tuned for the next exciting episode!

A YEAR AGO: The sudden and tragic loss of my former brother-in-law Mike, one of the kindest men who ever lived. He was a good man a great father and grandfather. He will always be missed.

FIVE YEARS AGO: Some Saturday errands.