The only source of heat in – I guess I shouldn’t call it the new house after more than a year and a half of living here, but I lived in the old one for a decade, so the new one still feels, well, new – my current abode is a heater impersonating a wood stove. It has faux logs and is powered by the ever-expensive propane. It also needs electricity to work, just like the cooking stove, rendering it completely useless during the inevitable power outages. You may recall that I pretty much froze my butt off during the extended outage inflicted on us with apparent impunity by the dictators at PG&E.

When I first moved in, it was late May, but there were a couple of chilly days. I could not get the heater to light, and since Rob is now 20 minutes instead of 2 minutes away, I had to resort to asking my landlord for help. To be fair, I did count on Rob for help with things that my actual landlord should have handled, but Rob tended to be more responsive and have better solutions to my problems. So in my relatively Rob-less, relatively new house, I have to call on Danielle.

She came by, and before investigating the situation, asked, “You aren’t very handy, are you?” This was before she used about a hundred matches trying to light it and finally contacted the repair guy. Of course, it was the Memorial Day weekend, so he wasn’t immediately available. I think she was a bit embarrassed. While it’s true that I’m not handy, this was not really proof of that fact, since she also could not get the heater to light, and when the repair guy appeared, he couldn’t, either. He had to order a part and then come and install it. After that, it worked fine all winter.

Our seemingly endless summer has seemingly ended, and with a hard frost warning and cold winds blowing around the house, it was time to turn on the heater. But it refused, sitting there dark and cold and stubborn. I had failed to notice that the pilot light was out on the heater until I wanted to actually use it. I should have noticed, since the pilot light keeps the top of the heater pretty toasty, and it’s Dodge’s favorite place to hang out unless it’s very hot outside. He hadn’t been lying there lately, now that I thought of it, so the pilot light had probably been out for months without my realizing it.

Another call to Danielle. Despite her handiness – she milled the wood for the house and built it – she could not get the heater to light, though this time she refrained from editorializing on my (quite genuine) lack of handitude. Once again, she had to call a repair guy. This repair guy talked to himself as a sort of running commentary, so I never knew if he was talking to me or not. He basically dismantled the whole thing and was doing a lot of clangy things. When he took the top of the heater off, there was a mat of Dodge hair, like dryer lint. My contribution to the repair process was to remove the mat and dispose of it.

Eventually, he had it going again. He did say that if it continued to go on strike, Danielle was planning to buy a new heater, which would have to be located against an outside wall. This was a little alarming to me, since it would have to be placed to one side or the other of the back door, this ruining the room’s symmetry, though another option would be next to Rob’s bookcase, below Saffron’s glorious paintings: 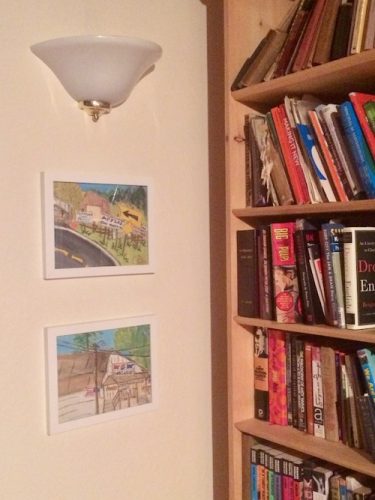 which would look better, but would be less efficient, since it would be in a corner. The current heater is about 25 years old and apparently heater technology has improved during that time. But I’m hoping we can just keep it going for now, especially since winter is here.

A YEAR AGO: The horror of the PSPS. I hope that never happens again.

FIVE YEARS AGO: A foggy Halloween.

TEN YEARS AGO: A beautiful way to remember lost loved ones.

FIFTEEN YEARS AGO: What to do with that pesky leftover wedding jewelry.