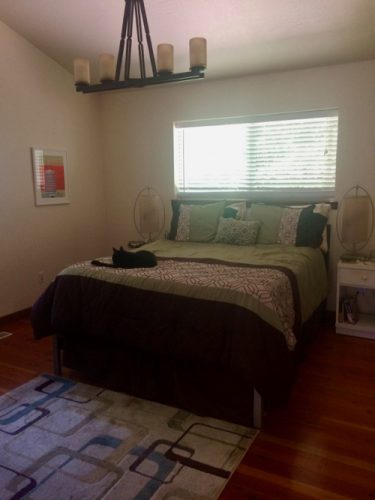 I kept hearing about how weighted blankets are comforting and help one to sleep better. Who doesn’t need more comfort and better sleep? So I decided to get one.

Blanket One weighed 15 pounds. It felt pretty heavy just wrestling it from the PO box to the car and from the car to the house. Not to mention up the stairs. I was a bit disconcerted to discover that it was much smaller than expected, barely covering my queen size bed when the blanket was placed sideways. Hm.

Once under the covers, it felt a little heavier than I expected. I wondered if I just had to get used to it. Later, I felt too warm and pushed it off, even though it was supposedly “cooling” as well as weighted. I ended up sleeping under just the comforter. I tried it a few more nights, and it was still too warm and too heavy. So I returned it to sender and exchanged it for…

Blanket Two, which weighed a slightly more svelte 10 pounds, and upon being unfolded from its case, was much more size-appropriate. It was nice that it was less heavy, but it was still warmer than I found comfortable. Let’s just say that I dragged out the fan I thought I had put away for the winter. I wanted to try to get the feeling of being hugged and the better sleep. But as you know, we are a family of bad sleepers, and I didn’t get the magic of a much better night’s sleep, as reported by most people. Also, I am bad at relationships, so maybe the hugged all night thing isn’t for me, either. In my single days, I always went to the guy’s house so I could escape. Also, they would not know where I lived and turn up at unexpected and inconvenient times hoping for a rematch. Presumably those who enjoyed the all night hugging feeling planned things to facilitate more hugging rather than less.

Long ago when I moved to California, I was mystified by why no one believed in insulation or window screens. It gets cold (and hot) here, and there are bugs. At the old house, it was basically like sleeping in a tent, and was around 10 degrees warmer than the outside temperature overnight in the winter. It was pretty common to see my breath when I woke up on winter mornings, especially since I was too cheap to have the heat on overnight after Henry Etta died. But at the new house, it is so well insulated that I can hardly hear the rain even when it’s storming out, and the house does a pretty good job of keeping the heat in during the winter and the heat out during the summer. Imagine!

There are even screens in the windows, but they are not Dodge-proof, like the metal screen door on the balcony at the old house. So no opening the windows to cool down the room and facilitate the great weighted blanket experiment. Even when it was 32F/0C outside overnight, it was too hot and I kept pushing the weighted blanket off, even the 10 pound one. I looked into getting a 5 pound one, but they only come in kids’/twin bed size, so that’s out. At that point, I gave up on the weighted blanket concept and moved on to Blanket Three, the cooling bamboo blanket.

It appears that the third time is the charm, since the cooling bamboo blanket with my lightweight comforter is just about perfect. I feel like Goldilocks (Suzilocks?) and the three blankets. This one’s too heavy. This one’s too hot. This one’s just right. At least the bear (or bears) in my story stay outside the house.

A YEAR AGO: A fun and silly Girl Night with my sister (and extremely tolerant brother-in-law).

TEN YEARS AGO: Working on Christmas cards. Which I am also doing now.