I love my birthday, but I have never liked my name. Susan Jean is about as dull as you can get. I have always felt that I deserved something more glamorous, though I don’t know what that would be.

My much-loved maternal grandfather, HoHo (named for his distinctive laugh), used to call me Suzy. When he died, I was only 15 and I was crushed. I didn’t want anyone calling me by his special name for me. But after a couple of years, I missed it, and my family and close friends started calling me Suzy. At work, I’m Susan, but here and in my real life, I’m Suzy. A little more sparkly than Susan, who sounds so dull and responsible. Both the Susan in the Narnia books and the one in the Swallows and Amazons books certainly were. Even the Divine Jane’s Lady Susan was pretty obnoxious.

My mother, whose enjoyment of the sparkly I inherited, wanted to name me Amy Victoria. My paternal grandfather’s middle name was Victor, for the Queen (both of my grandfathers were named Ernest), so it would be a compliment to him as well as the Old Queen*. Despite that, my English father vetoed the idea, and they somehow settled on Susan Jean, the Jean for Dad’s only sibling Jeanne. I would like it better if I, too, had the French spelling, but what can you do?

Mom didn’t give up on Amy Victoria, though, and when she was expecting the next baby after me, Dad agreed that this one could be Amy Victoria. He even gave Mom a little pin: 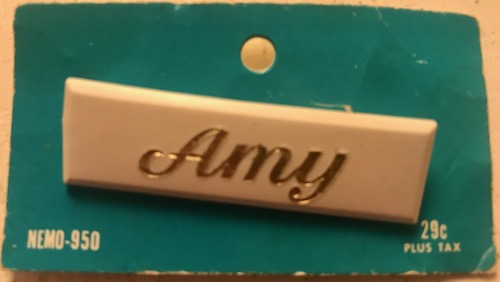 The baby turned out to be Jonathan David.

By the time the last baby came along, many years later, the AV idea was forgotten, and it was decided that the new baby would be called Colin if he was a boy and Megan if she was a girl. The baby turned out to be the Megan Fairbanks (Mom’s maiden name) we all know and love.

Sometimes I wonder what my life would have been like if I were Amy Victoria. Would Amy still live in San Francisco? Or maybe she would have stayed in New York state. Maybe she’d be better at relationships and marriage than I am. Maybe she’d have children. Or maybe, just maybe, she’d be just like me. Maybe a Suzy by any other name is still a Suzy.

* Queen Victoria fascinated me from a young age. And I have to admit, I love the Royal Family. My English father could not care less about them, but I do. I made him take me to see the open State Rooms at Buckingham Palace once. He enjoyed it much more than he expected.

**I have always loved this Elton John song. It is from Honky Chateau, which Mom played a lot and is one of the first albums I can remember.

A YEAR AGO: A wonderful afternoon at the Symphony.

FIVE YEARS AGO: Getting ready for Thanksgiving.

TEN YEARS AGO: Skipping Thanksgiving. I did that this year, too.