I’m pleased to announce that Wednesday and I have been reunited.

Rob came by and replaced the headlight pretty easily. While the new battery had a handle, facilitating getting its extreme heaviness out of one car and into the other, it was also a bit smaller than the old, handle-less one. Rob looked around and found some wood to hold it firmly in place, and so far, so good.

His quest to make my life better continued a few days later. Rob arrived one Sunday afternoon, armed with tools and shelves for the Closet of Doom. I had kind of thought it would be a few weeks before anything happened. I wasn’t expecting an instant installation.

Here it is in all its Doomish glory: 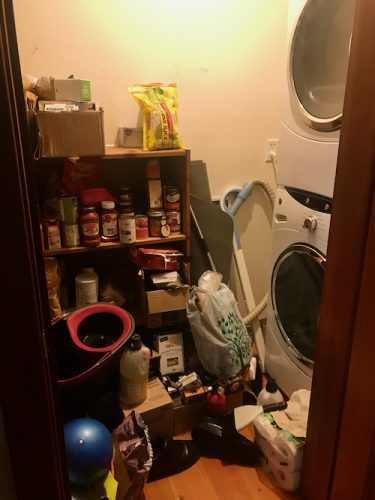 As you can see, it’s a really awkward space, with one side the slope-y part under the stairs, cut off by the propane heater vent pipe, which makes it impossible to walk back into the slope-y part: 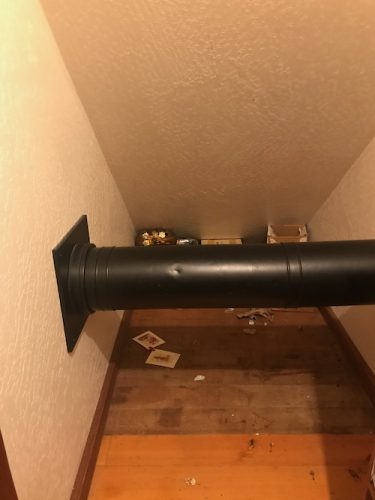 The other side is mostly occupied with the washer and dryer: 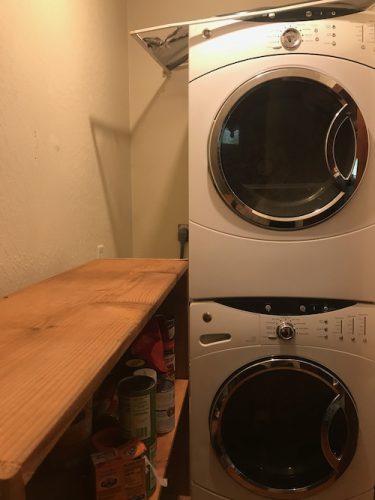 The washer takes about 5,000 years to wash anything, and the dryer only allows one to choose between low and lowest, so each load of laundry takes at least three tries to dry. When I moved in, Danielle made it clear that she was not responsible for the quirks of the washer and dryer, so there you (and I) have it. At least I don’t have to trek 25 miles each way to the closest laundromat*.

Rob and I removed all the things and stuff from the closet, and then the existing shelf, which also blocked the light switch so I had to reach behind it to turn the light on and off. Why it’s not conventionally located by the door, I don’t know. All part of the Doom experience!

*Long ago when I was young and living in the big city, my bijou apartment did not have laundry facilities, so I used to drag my laundry a couple of blocks to the laundromat. Sometimes, I’d go to a nearby strip club to wait for the wash cycle to be finished, since each dance took about the same amount of time.

A YEAR AGO: Car problems were making Wednesday and me a little less than happy.

FIVE YEARS AGO: My last day of working at the jobette. I’d still be doing it if I could. So much has changed.

TEN YEARS AGO: New tile in Megan’s bathroom and new carpet for my sleeping loft.

FIFTEEN YEARS AGO: Bettie Page on the TV and a naked man on the fire scape watching a fire on the building’s roof. You know, the usual.