It was nice to come home and find Rob there pottering around. This happens less often now that I reside 20 minutes away instead of two minutes away (or less, before Megan and Rob moved to the family estate).

He diagnosed a problem with the hose that had been puzzling me – not, as I had thought, that I bought the wrong size sprayer attachment, but rather, the acidic water at the old place had rotted out the interior threads that the attachment should fasten to. He cut off the rotten end and gave it to me to take to the hardware store. I will get a new one and let the expert install it.

Rob brought a rake so I could rake up the remainder of the bear-related mess: 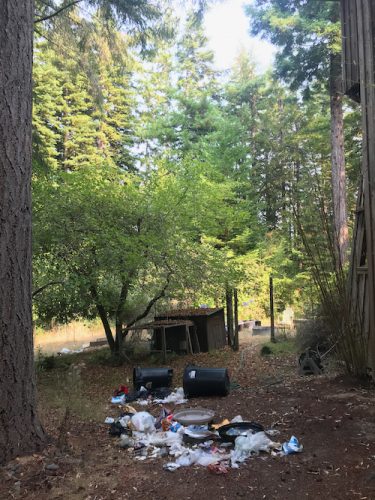 I put the big stuff back in the garbage over the weekend, but little bits were loitering with intent in the fallen pine needles. I also found a trash annex next to the compost pit. Thanks, Mr. Bear! On the bright side, he has not made his presence known since I sprayed the trash cans with ammonia, nor have I had any bear sightings on the increasingly dark mornings when I scurry to the car.

He also took a look at the Closet of Doom, which is located under the stairs. It is a repository for pantry items, cleaning supplies, shoes, my current handbag, and the washer and dryer. It has a rather challenging shape, since it is under the stairs and one end slopes to the floor. At that end, I have things that I don’t need to use very often, like Christmas ornaments and my father’s letters, which I still cannot bring myself to read nearly two decades after his death, though they are also some of the most precious things I own.

In addition to the steep slope, the propane heater’s stove pipe goes directly through the closet to vent outside, cutting off the sloping side and making access to it even more difficult.

So Rob is going to design some kind of shelving solution which will avoid the pipe and hopefully make the space more usable than it is. I do miss the storage space at the old house. Hopefully Rob can come up with an ingenious Rob-type solution. I got money out of the bank to give him for supplies, and I think I can hear his creative brain whirring as I write.

A YEAR AGO: A culinary adventure.

FIVE YEARS AGO: Celebrating my brother’s 50th birthday. He has now been promoted to big brother. Megan is next in line for promotion.

TEN YEARS AGO: Megan was back at work after recovering from knee surgery, to the joy of her colleagues.

FIFTEEN YEARS AGO: Calamity Suzy once again tests the limits of gravity.