Morning darkness has begun its inevitable descent, and I’m sorry to say that high beams have once again made their appearance, at least for the first part of my drive to work.

Darkness to me is like winter for Canadians. In Canada, you get about 9 months of winter or winter-esque weather, and about three months of summer. Of course, both of these are extremes of cold and heat. Don’t forget the humidity! In my case, there are about nine months of driving to work in the dark, and maybe three months of morning light. Don’t forget the cruelty of Daylight Saving Time! As soon as there is a glimmer of morning light, it is wrenched away from me, and I plunged once again into darkness, blinded by oncoming traffic and praying that I won’t hit a deer.

Arriving at work, I now have to put on my office lights: 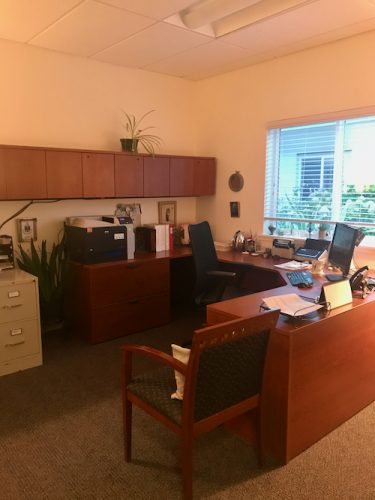 I am reluctant to do this, since it signals the decline into darkness. Much as I dream about moving to Alaska, so I will never, to paraphrase Scarlett O’Hara, be hot again, I know I couldn’t live with the darkness of winter there. I would be fine with the cold, just not the endless blackness. When I lived in Canada, I always minded the summer way more than the winter. I used to start dreading summer along about February. I still do.

Along with the darkness, the garbage-seeking bear has made his possibly annual appearance. I think he is drawn by the crabapples that I fail to pick. I used to make crabapple jelly with my American grandmother, picking the fruit from her trees, and it was a beautiful, jewel-like clear red when we were finished. I remember that the actual production made the kitchen pretty hot, and that we sealed each jar with a white paraffin cap. Nana was very proud of her root cellar and preserves, as befitted a former farm girl who lived through the Depression.

She would not be proud of the bear-attracting crabapples or the fact that I just let them fall off the trees and rot (fertilizer!). This year, the bear seems to be limiting his garbage exploration area to right beside the house. Easier to clean up than when he dragged it away to investigate it, but I wonder if this means he feels more comfortable. That thought makes me distinctly uncomfortable. Also the garbage looks quite sordid when it is strewn around the house.

Time to start spraying the garbage cans with ammonia again and hoping that will deflect the ursine invader.

A YEAR AGO: A first attempt at making Montreal bagels. My technique has improved, and I’m now pretty good at it.

FIVE YEARS AGO: A close encounter of the deer kind.

FIFTEEN YEARS AGO: Something pretty. You will have to take my word for it, since the photos did not survive.