Megan got very little sleep during the blistering hot plague. It’s particularly difficult to sleep during the day when your bedroom is likes its very own little oven, even when you have just worked twelve fun-filled hours in the ER.

Megan got maybe three hours of sleep, and decided that she was too impaired by lack of sleep to go to work that night. She agreed to be on call, hoping that nothing would happen. Of course, something happened.

A car turning off the highway was rear-ended, and the force of the rear-ending pushed it into oncoming traffic, with predictably unpleasant results. One of the people involved was flown out from the scene and another was brought to the ER to be packaged up and flown out in turn. There was blood and chaos. The road was closed for some time as well.

Fortunately, that was Megan’s last shift of the week, and the next day, she suggested that we go to our favorite seaside bar for a well-earned drink or two.
We sat at the shadiest possible table, right outside the restaurant door, hiding under an umbrella. I was wearing SPF 100, just in case. I’m like a vampire. It’s surprising that I don’t burst into flames upon exposure to the sun. We still had a lovely view of the ocean, though I am sorry to report that it was a completely unreasonable 83 degrees. By the ocean, people. Where it should be 65 with a sweater-requiring breeze.

Although we’re not normally bourbon drinkers, we were unable to resist the blackberry bourbon smash: 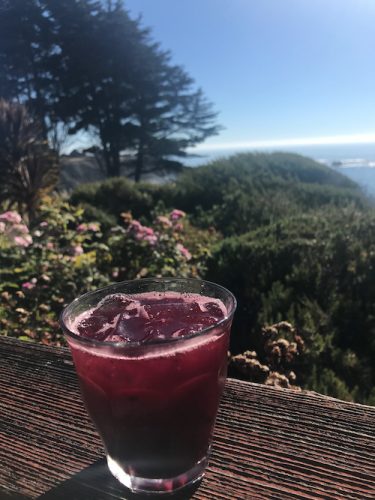 It was inspired by the abundance of local wild blackberries. They are muddled and then bourbon is poured over them. The mixture infuses for four days, and when it’s cocktail time, simple syrup, a dash of lemon, and some soda is added. Garnish with mint leaves. It was delicious. I would like to try making it with vodka. Maybe even berry vodka! We could also throw in some of the raspberries from the garden. The cocktail shaker awaits!

FIVE YEARS AGO: Everyone needs a drink after a visit to the dentist. Maybe before, too.

TEN YEARS AGO: It was hot and heinous.

FIFTEEN YEARS AGO: Riding the bus was educational, to say the least.