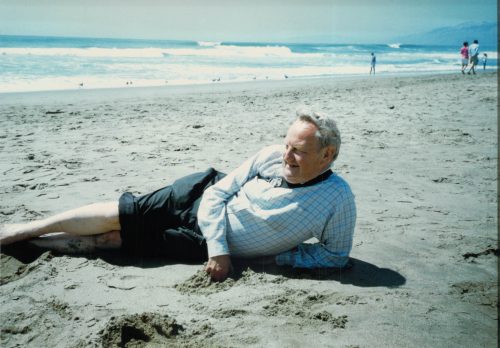 Nineteen years ago, my life changed forever with a phone call. I will never forget hearing my sister’s voice telling me that our beloved father was dead. I understood the words individually, but not together. They seemed to hang in my brain, jostling each other and moving through a cloud as I struggled to understand what Megan had just told me.

To be fair, we had been informed that he was recovering well from routine gallbladder surgery and was expected to be released from the hospital just a couple of days later. There was no expectation that he would die.

Dad was only 70 when he died, just twelve years older than I am now. He was still editing a monthly scientific journal, and was slated to chair an international meeting OECD meeting in Germany a couple of weeks later. Plants he had ordered for fall planting in his beloved garden arrived a few days after I did, and the bird list he sent weekly to the RSPB lay on his desk, with his pen and glasses on top of it. When I first saw his study after his death, it looked like he would walk into it any minute and pick up his work. The work he loved.

There was no reason for him to die.

The hospital staff took Dad off blood thinners before the surgery so he wouldn’t bleed out. Then they forgot to put him back on them afterwards, and he died of a blood clot. Totally preventable.

He died in his sleep around 6:00 in the morning, the time when he usually arose for the day. My sister told me later that all the lines were gone from his face. She got into the hospital bed with him and put his arms around her. She stayed there until physically removed. She could feel the broken ribs from the pointless CPR efforts. She could feel his stopped heart. She could smell his scent. She knew he was gone.

Nearly 20 years after his death, I can understand why Queen Victoria mourned for the rest of her long life after losing Prince Albert. I will be mourning the rest of mine, too. Some days, I feel as devastated as I did that summer morning when the phone rang. Sometimes I remember Dad with a smile, thinking of the many happy times we spent together. I still think of him every single day. And I will always miss him. I will always mourn him. I will always love him.