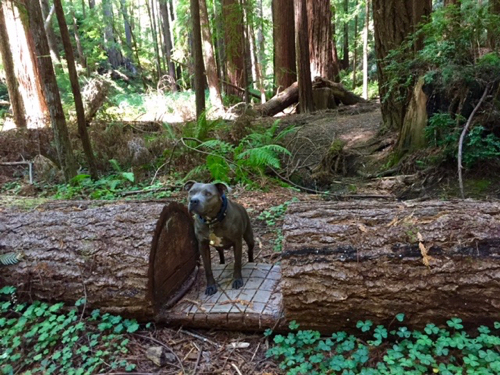 The velvety Stella having fun in the woods

Megan noticed a bump on Stella’s velvety grey leg. She took Stella to see Dr. Karen, who did a needle biopsy and then said the C word. You know, the one no one wants to hear. The lump had to go, but it was a long two week wait until Dr. Karen had room in her schedule to do the deed. It gave Megan time to scrape together the shocking amount* of money needed for the surgery without knocking over a liquor store or going on a multi-state crime spree. It also gave us a lot of time to worry.

The day finally came. Megan decided that while Stella was knocked out, they might as well clean her teeth and trim her nails, so we knew it would be a long day. Megan joined me at the clinic after she dropped Stella off, thinking she could get in a couple of hours’ work before Stella was ready.

It ended up being almost a whole day. Dr. Karen removed several moles, just in case, along with the lump on Stella’s leg, and also found one “near her jugular”. This did not sound good to me. They did a scan which revealed no other lurking C, to our relief, but we will have to be extra vigilant from now on. Fortunately, Stella doesn’t have a lot of fur and loves to be petted, so that will help.

The poor girl looked in worse shape than Megan’s wallet when she was released. She is the Patchwork Dog of Oz, with stitches all over that somehow have to be kept magically clean while they heal up: 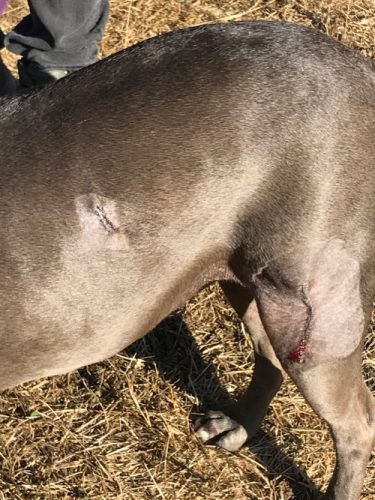 Star, of course, was worried about her beloved companion, and sniffed Stella carefully when she finally got home. She has been staying close ever since. It is sweet how bonded they are and how much Star has come to rely on the calming presence of the younger Stella (much like my neurotic self relies on my much younger and wiser sister to get through life.)

We are now waiting to hear what stage the cancer was at when it was removed, which is nerve-wracking, though it was encouraging to hear that there were clean margins. So we are hoping for the best, keeping Stella as clean as we can, and petting her as much as we can.

A YEAR AGO: A neighborly day (and evening).

FIVE YEARS AGO: Terrifying wildfires in nearby counties. They are every Californian’s worst fear, and reasonably so.

TEN YEARS AGO: Making fruit crumble, with apologies to the great Jacques Pépin.

FIFTEEN YEARS AGO: What I am.