July 1 marked Megan and Rob’s 29th anniversary! Here they are on the big day, with a beaming Dad: 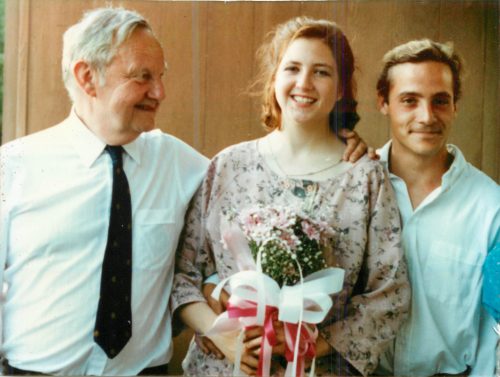 I realize that Dad was around the same age then as I am now. How did that happen?

Megan and Rob were married at our godparents’ house in San Francisco by a Justice of the Peace. Dad and I both had concerns about Megan getting married so young. She turned 20 just a few weeks before the wedding, and Rob was seven years older. Rob has been our brother’s best friend since they were nine years old, so Megan knew him most of her life. But your baby sister or youngest child getting married when barely out of her teens would give many people pause.

Megan has always known her own mind, ever since she was a baby, so it shouldn’t really be a surprise that she and Rob are still married.

At the time they were married, they lived on a little sailboat at Pier 39. Then they moved to their teeny house in Hooterville, and finally to the family estate, where they and Jonathan live. When they still lived in the teeny house, they had our dying mother living with them for several years, including stints with her hospital bed taking up most of the living room. Rob made changes to the house to make Mom more comfortable, and visited her in the hospital. He never complained about having his admittedly difficult and very ill mother-in-law living with him for so long in such a small space.

Megan and Rob have been through a lot over the nearly three decades they have
been married. Megan says that when things get hard, she and Rob just take each other’s hands and walk through it together. I would say they probably love each other more deeply and truly today than they did on the starry-eyed day when they took their vows. I am so glad they found each other and stayed together all these years. Here’s to the next 29 years and all the adventures still ahead!

A YEAR AGO: The wonders of Flynn Creek Circus.

FIVE YEARS AGO: What do mysterious runes and my handwriting have in common? And is Erica a magician?

FIFTEEN YEARS AGO: In case you ever wondered, hospitals are not at all like spas.