It’s no secret to you, faithful readers, that our heroine tends to get up early, even when it’s unnecessary*. It’s supposed to be better for you to more or less stay on schedule all week instead of staying up late and sleeping in on the weekends. All I know is, it’s different to just wake up rather than get woken up by the alarm. And on the weekends, I make coffee and go back to bed with it, so it’s not like I’m getting up and staying up.

So I do leave the house pretty early in the morning. In the winter, it’s usually night time black when I head out of the lotus gates, but this time of year, it’s light out, with the birds singing loudly and brightly. I have noticed quite a few fawns lately, playing in and near the road under the nervous, yet watchful eye of their mothers, and calves staying close to their own mothers in the wildflower-strewn meadow. Sometimes a raven swoops across the road, or a Steller’s Jay flashes a brilliant blue wing in the dark woods.

In general, other than wildlife, this Ridge is less inhabited and less travelled than the old one. I almost never see another car on my way to work, and I rarely have to wait at the intersection of Ridge and highway: 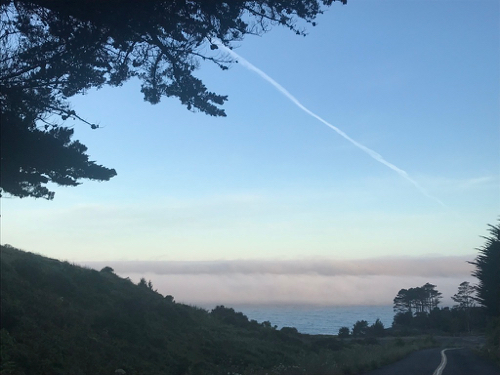 for another car to pass by before continuing my way workward.

I was quite surprised one morning to come around one of the Ridge’s many curves to find a truck sitting there. Its lights and engine were on, and the truck bed was full of wood. I rolled down my passenger side window so I could ask the driver how s/he was doing once I pulled up alongside the truck.

Once I did so, I looked across and saw the driver was asleep, either temporarily or permanently. I parked my car and got out to investigate.

I knocked on the window and woke up the driver (or parker). He did not roll down his window, but I asked if he was OK anyway. He nodded. I was not convinced on this point, so I pressed a little further, asking, “Are you sure?” Again he nodded, so I gave up at that point and got back in the car. His eyes were already closed.

I felt bad leaving him there, and hoped he wouldn’t get hit by another car and that he could find his way home safely. Six o’clock in the morning seems like an early hour to be incapacitated. My sister thinks it might have been opiates rather than alcohol at that hour, since they tend to make people sleepy. Who knows? I just hope the rest of his journey was safe.

A YEAR AGO: The novelty of house keys and getting to know my new appliances.

FIVE YEARS AGO: Encounters with wildlife, one way and another.

TEN YEARS AGO: Audrey felt lonely and I felt guilty. Still do!

FIFTEEN YEARS AGO: Heading to the hospital to visit Mom.

*Recently, Megan was going kayaking down the scenic Hooterville River. She had to get up early to do so because of the tides, and texted me:

I do find it amazing that she goes from 12 hour night shifts to daytime every week. Half the week she’s sleeping in the day and working in the night and then reverses it for the rest of the week. Like voluntary jet lag!