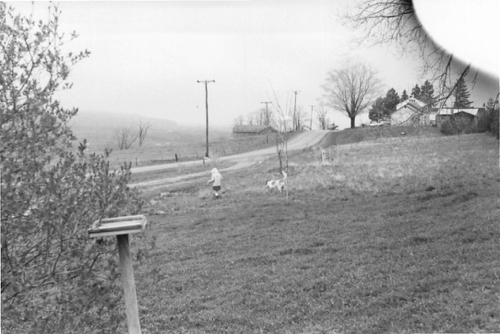 Ginger and Jonathan at our childhood home

I came across this photo recently of my brother and our dog Ginger at our childhood home in upstate New York.

The photo gives a clear view of our route to the school bus stop, at the Nagels’ farm, just across the road from the Morgans’ house, on the upper right hand side. Given that our driveway was about a quarter of a mile long, I think it was close to half a mile to the bus stop, rain, shine, or snow. I clearly remember following the path we made in the snow. Sometimes we would walk past the five acres of pine trees, which housed our tree house and the large enclosure for the wounded* Snowy Owl who lived there for many years. We chose a Christmas tree there every year to cut down and bring home.

It was only recently that I wondered why my mother, who never worked, did not drive us to the bus stop, or to school, for that matter.

Ginger did not follow us to the bus stop, though he was never far from Jonathan’s side, and rescued him a couple of times, Lassie-style, from falling through a snow bank and into the nearby creek. Ginger never had much use for females of any kind, though he had a soft spot for the Nagels’ dog Daisy, who was actually allowed to play on our land. Ginger was welcome at the Nagels’ farm, where he obligingly removed the rat population from the barn.

Everyone needs a hobby, and Ginger’s was killing things. He was very efficient, from the few times I saw him in action. A swift neck break and it was all over. He also took his guardian duties seriously, even silly females like Mom, Megan, and me. When Dad was home, Ginger slept on the landing of the stairs, but when he was away, Ginger slept stretched out across the front door. No one was getting in without his knowledge.

Ginger was devoted to Dad. After all, Dad found him.

For some reason, Dad used to load us into the car and take us grocery shopping on Saturday mornings. We would also go to the library and anywhere else that was necessary, like the hardware or feed store. Again, it’s only in the last couple of years that I wondered why he didn’t just go alone, which would have been much easier.

On this particular day, we arrived at the Victory Market to discover that they had animals up for adoption, an arrangement that Jonathan would refer to as a “pity pit” as an adult. Jonathan would adopt the unforgettable Jed** the Wonder Dog from a pity pit on the other side of the country about 20 years later. Dad warned us that we could look at the animals, but we were not, under any circumstances, taking one home.

Of course, we would have agreed to just about anything to go and pet the puppies and kittens. One of those puppies jumped into Dad’s arms and stuck his wet, cold nose into Dad’s neck. Ginger came home with us that day, and was a beloved part of the family. He had his quirks, but we all do, and we all loved him. He was a great dog for kids who played outside as much as we did, year-round.

We were all shocked and saddened when Ginger was accidentally killed by hunters, but it was hardest, I think, for my father. I still remember the stricken look on his face. He immediately set off over the fields alone, where I suspect he wept and mourned his old friend where he could not be seen. He refused to get another dog** until Megan rescued Jesse, the last dog Dad would own, many years later. But that’s another story.

*Like Ginger, the owl was shot by hunters. Unlike Ginger, he survived. He was equally beautiful and fearsome.

**Jed has been gone for 13 years, and Jonathan has never adopted another dog. I don’t think he ever will. Jed was a once in a lifetime dog.

A YEAR AGO: Dodge’s daring (and destructive) escape.

FIVE YEARS AGO: A fun day off with my sister.

TEN YEARS AGO: A long day for my little sister.

FIFTEEN YEARS AGO: Watching TV shows about a fictional hospital in an actual hospital.