I don’t really think of myself as a baker. I can’t remember the last time I made a cake. I don’t even have cake pans, which probably makes it unlikely that I will be doing so any time soon. I am no Erica! She can make anything. I always joke with her that Jessica is the logical conclusion to her ultra craftiness. “I’m going to make a human being! And she’s going to be awesome!” And she is.

I am good at making Montreal* style bagels, somewhat surprising since I do not have a wood-fired oven and have never lived in Montreal or have any Quebec background at all. Also because it is a lengthy process, and you know how patient I am not. I have streamlined the process as much as possible, having learned a few things along the way, like proper shaping technique. I am pleased to say that they almost never come apart during the boiling process. And there’s something meditative about rolling them in my hands while looking out of the kitchen window at the mighty redwoods and passing wildlife. Here is the most recent batch: 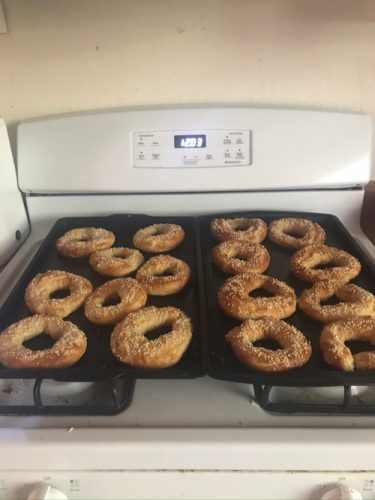 Recently, I tried my hand at lumpia Shanghai, a kind of Filipino egg roll. I was a little intimidated by the rolling technique, but it was easier than I thought. I did not deep fry them as the recipe said, just lightly fried them. They were not at all greasy, and the filling was a wonderful, savory combination of juicy ground pork and crunchy water chestnuts and celery: 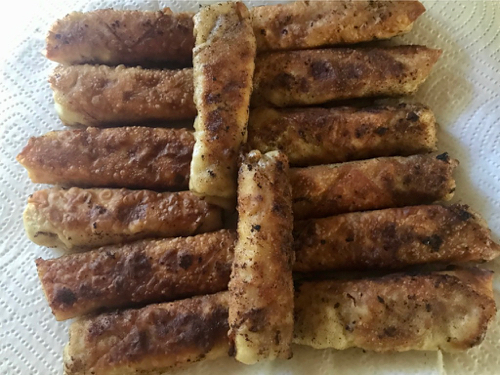 I also skipped the suggested accompaniment of banana ketchup, which just sounds weird to me. I made a dipping sauce of sesame oil, soy sauce, rice vinegar, a few sesame seeds, and a dash of brown sugar and called it good. And it was.

Another new baking endeavor was cinnamon rolls, made from a friend’s father’s recipe. They turned out well, though the recipe was somewhat vague in places. It didn’t say what thickness the dough should be before rolling, or how much sugar and cinnamon to mix together for the filling (it just says, “A mixture of sugar and a generous amount of cinnamon”). It called for a mixture of Crisco and margarine, which horrified me, so I substituted butter. Despite all this, they were great: 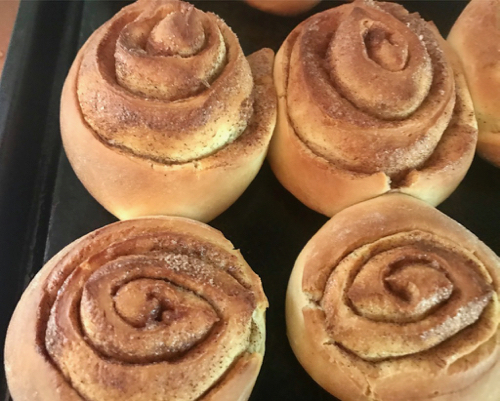 It’s a little late in the year for resolutions, but it’s good to work on being a more confident baker. Who knows, maybe I’ll get around to making a cake before my next birthday!

*Lately I’ve been watching a TV show filmed in Montreal called “Bad Blood”, starring Kim Coates. I have loved him since he was a bad guy (he is pretty much always a bad guy) in the late ‘80s-early 90s “Street Legal”, a TV show I would like to revisit. “Bad Blood” is a fictional riff on a real Montreal mob empire, and very entertaining.

A YEAR AGO: The cats were enjoying their new home. I note that now Audrey is upstairs all the time and the boys are downstairs or on the bed. The dishes and litter box are upstairs now, too.

FIVE YEARS AGO: Remembering a long-ago trip to Paris.