Despite the horror of the lamb* and the milder ick of the cauliflower soup, I had not totally given up on the lure of the Michelin starred food right here in Nowhere. After the shocking unappetizingness of the last meal, I gently suggested that they might want to post the menu before taking orders for the meal. I’m sure I wasn’t the only one, since they did just that and it sounded pretty good:

This time, the dessert cost extra. It was “Japanese cheesecake”, and since I do not like cheesecake and Asian desserts tend to be on the overly sweet and weird side for me, I passed on that in favor of a loaf of their excellent sourdough bread instead.

Instead of going home that Friday, I kept going down to the South Coast. It was a beautiful day for a drive: 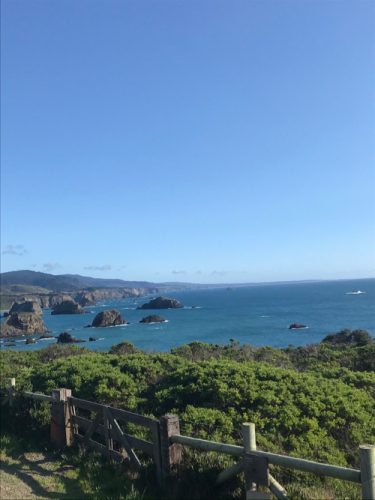 As I paused to take some photos, I saw a whale flip his tail out of the water and another spouting as he made his majestic way through the blue waters of the Pacific. Arriving at the restaurant, I was handed a plain brown paper bag, and I retraced my steps back home, where I unpacked it: 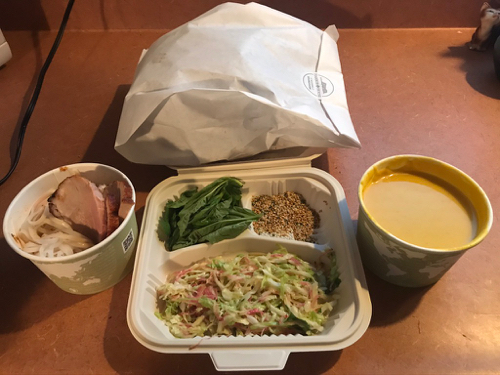 Apparently, the foragers were not successful, since there was slaw instead of foraged salad. I called the restaurant to ask how to assemble it. It turned out there was orange-ginger slaw on the side, and the rest of it (toasted sesame and hemp seeds; fresh cilantro and basil; and preserved lime) all got mixed together with the pork and rice noodles.

The soup was pretty heavy, though velvety, and rather dull. Same goes for the slaw. The noodles were ordinaire other than the preserved lime, a new ingredient to me which was delightful and which I would like to try making at home. Secretly (or perhaps not so secretly, since I just told you), I prefer the pork noodles I make, which seems astonishingly conceited, especially for someone who will never have a Michelin star or even half of one. At least it was only $18 per person instead of $180. Maybe it doesn’t translate well to take out or perhaps I can’t appreciate the subtlety of haute cuisine. At least I tried.

*Am amazed that they haven’t come up with a euphemism for it, like “beef” for “cow” and “veal” for “tortured baby cow”. They aren’t even pretending it’s something else.

A YEAR AGO: An unexpected, and unexpectedly moving funeral.

TEN YEARS AGO: The peaceful death of my beloved Henry Etta, the little stray cat who found a permanent place in my heart. I still miss that scrappy little thing.