The grandfather clock in my house is probably older than this country, depending on whether it was made by John Jullion Senior (born 1701) or Junior (born 1734). Mr. Jullion was a famous clockmaker from Brentford, England, who also made the oldest clock still on public display in Australia. That one was made in 1770. Even if it’s Junior, the clock is around 250 years old. And very well-travelled.

I first met this grand old timepiece at my grandparents’ home in Surrey. They moved into the house when they were married in the 1920s and lived there for the rest of their long lives. The clock had been in Grammie’s family since it was first built, coming down through Grammie’s mother’s family, the Smiths.

At my grandparents’ house, the clock lived in the dining room, which was used for every meal, but was also sacred to the game of cricket. When there was a match – especially a Surrey match – on the wireless (radio), no one could make a sound in the house while Daddy’s Daddy listened to the game in the solitary splendor of the dining room. 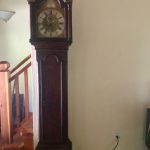 When my grandparents died, the clock was shipped to us, and when Dad retired back to his native England, the heirloom timepiece made its majestic journey with him. Unlike Dad’s 9 year old mutt Jesse, it did not have to be quarantined, and ended up living, like Jesse, in my stepmother Margaret’s lovely house in Wimbledon. About a dozen miles from where Dad grew up. Indeed, Dad used to walk Jesse on the same downs where he walked with own father as a boy.

When we lost Dad, I gained a clock, and it once again made its way across the ocean, this time to San Francisco, which was a mere wilderness when it was first built. Very long-time readers may recall the battle with Customs and the hassle of getting it set up and running again in my San Francisco apartment, where it lived in the hallway.

At that point in the clock’s long life, I learned that my great grandfather, the splendidly named Sydney Joseph Beaumont Smith (all of his children had only one first name), had cut the clock down from its original height in order to fit it into the flat where he and his family lived, above his butcher shop in Chiswick.

It was something of an Antiques Roadshow moment, where a person learns that if they only hadn’t cleaned that painting, it would be worth a million dollars, and now it’s only worth $20. But the value for me is not the financial one. It is knowing that generations of my family have cared for this timepiece, lovingly made by hand by a craftsman centuries ago, and now I am the guardian of the family legacy. It’s knowing that my grandparents used to listen to its measured tick, as did my great grandparents and earlier generations of my family, and that we are all bound together by the shared experience of caring for and marking our lives and our time together by this ancient timepiece.

A YEAR AGO: I was crowned. And not in a good way.

FIVE YEARS AGO: A lovely evening at the theater with the girls.

TEN YEARS AGO: The story of Henry, the stray cat who found her way into my heart. Our time together wasn’t long enough, but it was sweet.