You might be as surprised as I was to learn that there is a Michelin starred restaurant right here in Nowhere. Their prix fixe is a little out of my range, at $180 per person (and $120 extra if you order the wine pairing), so I was happy to learn through the ever-handy (and ever-quirky) local message boards that the restaurant was offering pick up meals for $18 a person. Even someone as math-challenged as I am can see that it’s a tenth of the normally astronomical price.

I went ahead and ordered it online and paid ahead per the instructions, without knowing what it was and suspecting that it might well be something horrifying, like lamb or salmon or mushrooms. Still, a Michelin star! Also I ordered a loaf of their house made sourdough to go with the mystery meal.

It was a glorious day as I headed to the magical south coast to pick up my mystery meal. I hadn’t gone far down the highway when a young man waved me to a halt. I pulled over and he told me that he had a flat tire. He wondered if Wednesday’s spare might work. I told him he was welcome to it, and removed it from the trunk.

Remembering my own flat tire experience, I told him not to drive far on it. By this time, the tire stores in the Big Town were closed, and I told the young man that they wouldn’t open again until Monday. We exchanged contact information, and he tried to give me $100 as collateral for my tire, which I told him was unnecessary.

I wished him luck and continued on my way to the restaurant, where I was handed a plain brown paper bag and the sad news that dinner consisted of braised lamb, cauliflower soup, and a cookie: 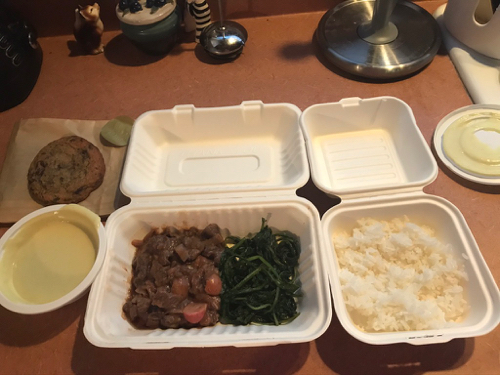 None of which appealed to me.

As I neared home, I saw the young man was still by the side of the road, but with another car and an older gentleman. I stopped and he told me that Wednesday’s spare didn’t fit, but the older gentleman’s spare tire did. They were applying it as I headed home.

So my record of never eating Michelin starred food remains more or less unbroken. The bread and the cookie were pretty good.

A YEAR AGO: Enjoying time with friends.

FIVE YEARS AGO: An unforgettable performance of A Streetcar Named Desire.

TEN YEARS AGO: My sister is totally amazing.

FIFTEEN YEARS AGO: Driving around in Florida.