I was long overdue for a visit to Angelika, both inside and out. I left work early one day and made my way to her little studio in the big woods. It was yet another eerily beautiful day, where you wouldn’t know it was February except for the daffodils and calla lilies everywhere. I don’t think we have had any rain since February 3. I hope there isn’t another drought and/or fierce fire season heading our way.

Angelika greeted me with a big hug and we went into the salon together. Her records revealed that I had not had my lovely locks attended to since August 23! I think it’s a credit to her artistry that they still looked pretty good. She cut two inches off and highlighted what was left, and we enjoyed chatting and catching up in the four hours it took to restore me to a better and blonder self.

Angelika is always so inspiring. She is an amazing artiste with scissors and dye, which needs some practicality, but she is also very philosophical and spiritual. Being with her really does refresh my inner being as well as my outer husk. I am hoping that she, Megan, and I can meet up outside of the salon soon.

Speaking of meeting up, Megan and I had a plan to meet Monica at our favorite seaside bar. The parking lot was oddly empty for a Saturday night, and there was a small sign on the door saying that they were closed until March 11. Megan texted Monica that we were relocating our evening out to the other bar in Hooterville (really, it’s somewhat surprising that there are two).

Also surprising was the fact that Bar Two does not have a cocktail menu. Megan and I couldn’t decide what to have, so we threw ourselves on the mercy of the bartender, who came up with a libation of gin, pineapple, triple sec, and a dash of lemon-lime shaken with ice: 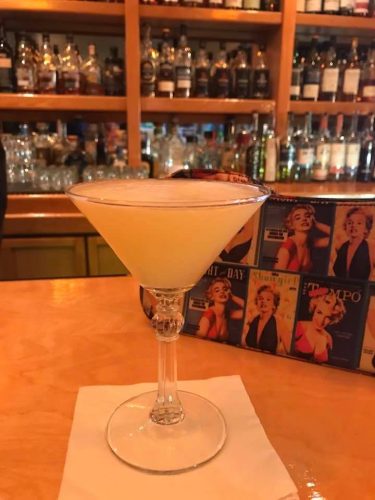 It was quite delicious and not at all sweet. When Monica joined us, she opted for a classic gin and tonic with Bombay Sapphire, so we were all drinking gin. I read an article recently about how hand crafted gin is having a moment. It certainly was in that bar that night!

It was good to spend time with my sister and our friend, relaxing among neighbors and visitors as the sun slipped into the ocean.

A YEAR AGO: Feeling better led to a housework extravaganza.

FIVE YEARS AGO: Home repairs brought to me by Rob, as most of them are. And the best fan letter ever!

FIFTEEN YEARS AGO: Weathering the storms in the Sunshine State.