It might surprise you that a girl who is as much of a sparkly princess as I am doesn’t live in a Jayne Mansfield style glory of pink and glitter. My décor is actually quite neutral. I mentioned to my long-time friend A, whose hobbies include interior design and restaurant reviewing, that the cats* were taking their toll on the beige linen upholstery on the living room chair, and she suggested that I switch out both the couch and the chair for blush velvet ones. She says blush velvet can read as neutral with the right accessories and would provide a welcome note of luxe in my country abode. Also that cats do not enjoy clawing velvet.

A did a lot of research on couches and chairs, and we narrowed down her selection to the dream couch and chair, but they will have to remain a dream for the moment, since I recently made a major investment in car repairs and have no budget for furniture or other frivolities at the moment.

So while I wait for my ever-tenuous finances to recover – if they do – I have been adding new cushions to the couch, which will be compatible with pink velvet if it ever occurs. A gave me the beautiful vintage hand-made suzani which is draped over the back of the couch, and also the hand-embroidered turquoise cushion on the left. I added the white, purple and pink embroidered cushion on the right. Allergy sufferers, beware: all the pillows in my house are feather. 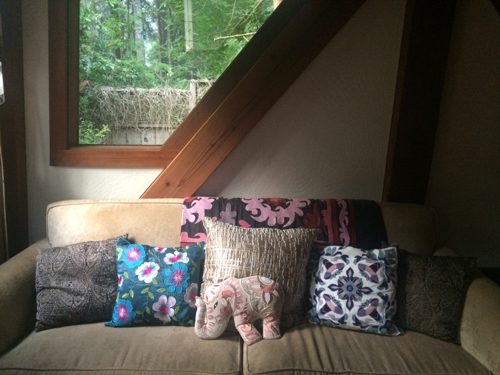 My plan was to replace the dark, beaded pillows on the ends. I still like them, but they don’t work so well with the new color scheme. I’m planning to see if Megan wants them, since she has no couch cushions and a nice, dark leather couch.

I consulted with A and we chose a pretty cushion on line, thinking that if I liked it enough, I’d get another one to match it. I ordered it two weeks ago and it has yet to arrive. The tracking number said it had arrived last Monday. I checked my post office box on Tuesday on my way to work. I picked up a box, which upon opening, revealed itself to be full of little bottles**, which I had not ordered. A look at the mailing label revealed that it was addressed to my brother, who has a PO box he shares with our sister. Megan checked their PO box in case my package was delivered there instead. Nope.

I checked with the shipper, who told me to wait a couple of days in case it turned up. I did and it didn’t. I contacted them again and they traced the package. Apparently, it was delivered to my old street address. Note that this does not mean it went to my old house. Deliveries to the old address went to a sort of decaying shed at the front of the property. Sometimes, they went to the front door of the rarely occupied front house. I am guessing this is what happened on this occasion. Fed Ex told me that the driver went to see what happened to the package and whoever is currently living in the front house kept screaming at him that she was not me and he should get out of there, which he eventually did. I’m guessing the screamer kept the cushion.

Fed Ex said it was their fault for not verifying my address. I pointed out that the shipper should not have allowed me to enter a PO box address if they were planning to ship by Fed Ex. Fed Ex also said that I might be surprised by the amount of fraud that goes on around missing packages. She gave an example of someone who said she never received her treadmill. When Fed Ex said they would have to send the sheriff around to investigate, she “found” it in her garage.

Anyway, it’s been a lot of fuss for a $20 cushion and I hope I love it if/when it ever gets here.

*To be fair, none of them goes outside anymore. But even when they did, they tended to claw indoor items or the house itself rather than the giant outdoor scratching posts, which you and I refer to as “trees” or “the woods”.

[Update: It never arrived. I got a refund and have officially given up on ordering from those people ever again.]

**For home-made hot sauce, made from the peppers they grew this summer.

A YEAR AGO: A wonderful sleepover with the wonderful Jessica!

FIVE YEARS AGO: A delightful evening with Megan and Lu.

TEN YEARS AGO: Getting ready to leave Oakhampton. And not a moment too soon.

FIFTEEN YEARS AGO: A few updates.