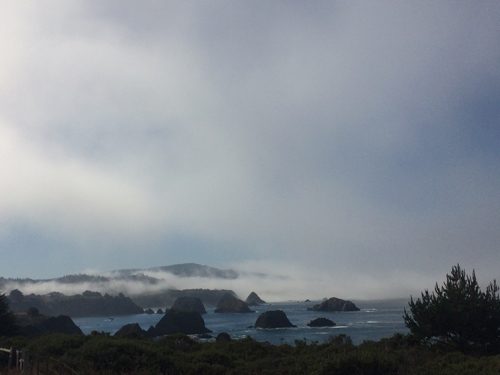 A Beautiful Day on the Coast

Sunday was another beautiful day. It seemed like a good day for a trip to the South Coast, especially since the inimitable Franny of Franny’s Cup & Saucer was guest chef-ing at the Garcia Guild breakfast in Manchester. It was a New Orleans breakfast, with white cheddar grits, sautéed greens with andouille sausage, scrambled eggs, nectarine, blackberry and mint fruit salad, biscuits with preserves, custard donuts, and orange juice.

Sounds good, right? However, the reality, as so often happens, did not live up to the expectations. Though I arrived a little more than an hour after the breakfast started, I soon learned that they were out of: coffee, orange juice, fruit salad, donuts, and preserves, with no plans to replace them. Each person at this allegedly all you can eat breakfast was limited to one single two inch square biscuit, which was of course the best part of the breakfast.

I knew that I was unlikely to change my long-held opinion that grits were gross, and this in fact did meet expectations. I couldn’t taste any cheese in the two bites I took of it, which only confirmed my dim view on grits. I left most of the breakfast behind in disgust along with my $10 (the entry fee was not reduced despite the fact that about half of the advertised items were not available). Never doing that again. Lesson learned! Stick to the Hooterville Grange.

My cloud of disappointment vanished immediately when I noticed that Franny’s was uncharacteristically open on a Sunday. I went in and got an almond croissant, sea salt caramel pecan brownie, and a slice of plum and frangipane tart. These were all fabulous.

I continued down the coast: 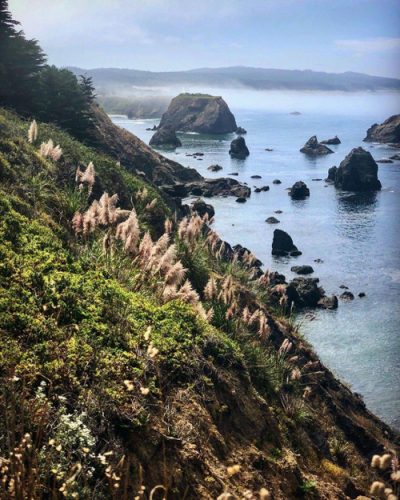 going from sun to fog and back again. Arriving at Anchor Bay Thai, I saw that they had painted a new mural on the back wall: 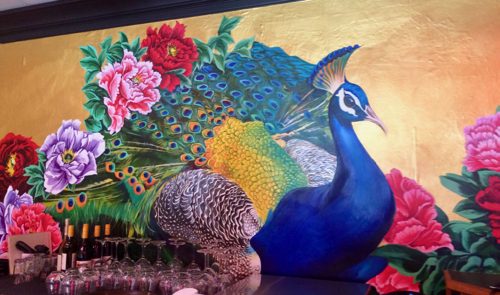 Really striking, and I love peacocks. With my to go order safely stowed, I headed to Gualala, where I looked around the bookstore and admired the ocean: 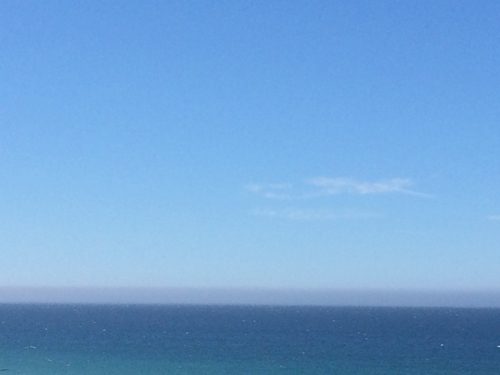 before heading back home in my delicacy-laden car. That evening, I watched the very enjoyable “Sudden Fear” with the one and only Joan Crawford chewing up the scenery and the sultry Gloria Grahame slinking through it as they battle over the affections of the charismatic Jack Palance. Bonus fun was seeing San Francisco in 1952 and mentally comparing the past and present. You can have a peek at the locations then and now here if you’re curious.

A YEAR AGO: Clyde and Dodge were getting closer. Now none of the cats goes outside if I can help it. Whatever scared Clyde that day has reduced or eliminated his interest in the Wide World, which is just fine with me.

FIVE YEARS AGO: A delightful evening at the theater with Megan and Lu. We are overdue for a girls’ night out!

TEN YEARS AGO: Remembering my grandparents’ long and happy marriages.