I had a fun Sunday without ever leaving Hooterville. I drove down my current Ridge a few miles to the Grange, where there is a pancake breakfast once a month. It was a beautiful day, and a beautiful setting: 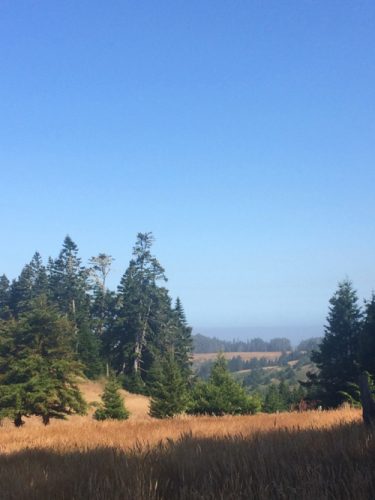 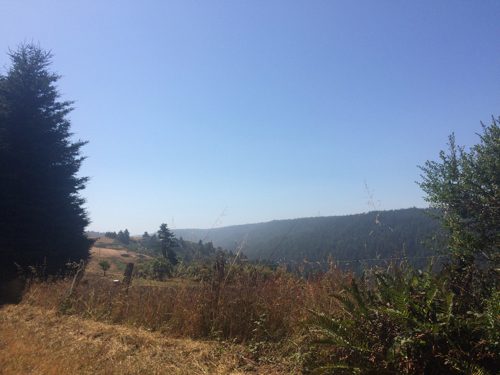 Inside, it was packed with neighbors, some known to me (Doug from the good old days at the Gro – he does not miss the store – and the lady who does wildlife rescue) and others unknown (pretty much everyone else). I noticed that all ages were well represented at the long tables in the hall, though the servers and cooks were definitely what the French call “of a certain age”. I have to wonder if succeeding generations will be as interested in community service as this generation is, and if this kind of community event will eventually become a thing of the past.

I pulled up a chair and was served with a Dixie cup (They still make Dixie cups! Who knew?) of orange juice and gave my order to the genial, aproned waitress. I could have had coffee, but as you all know, I only have my one cup a day and always before I leave the house. I am mystified by people who can get themselves together and dressed and actually drive to their workplace without benefit of caffeine.

I had fluffy pancakes with homemade berry syrup: 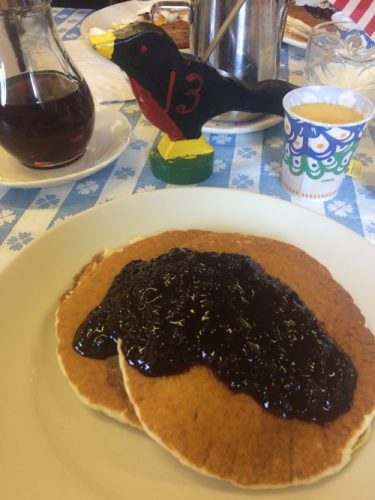 And they were delicious! I could also have had ham and eggs with it, and all of it was all you can eat. For $8! The proceeds go to help the local volunteer fire department, which was another plus in a series of pluses. It was like stepping back in time there, and I really enjoyed that feeling. It may have been my first visit to the Grange, but it won’t be the last.

Back at home, I was watching the Blue Jays game when I got a text from Dave and Jennifer, inviting me to a BBQ that evening. Even though it was a school night, I was happy to say yes and head over to the family estate.

This time, I kept going, all the way down to Dave and Jennifer’s place at the very end, making sure to close the gate behind me so the horses and ponies could not escape. It had been a while since I was there, and there were improvements to see, such as solar panels and an outdoor shower. Now that Dave has retired from his job working for the City of San Francisco, they are going to start building their house. They are also planning to sell their house in Grass Valley, so they have a lot on their plates.

We all had a lot on our plates: Dave barbecued marinated pork and salmon he and Jennifer had just caught, and served it up with salad, garlic bread, grilled vegetables, and wild rice. All this was topped off with tarts my brother made from raspberries he had picked that day. Joining us for dinner were our good friend Lu, Megan, Rob, Jonathan, Rio, and Dave and Jennifer’s former neighbors from Grass Valley, Stephanie and Peter. Stephanie and Peter originally hailed from Manchester, but have lived in many places. Peter was in television engineering and holds several patents, while Stephanie was a nurse, mostly in the ER, giving her lots in common with Lu and Megan. We had such a good time talking that I got to bed much later than I intended, but it was a day full of happiness.

A YEAR AGO: Megan and Rob moved onto the property. It was never the same without them, and eventually I moved too.

FIVE YEARS AGO: A day full of surprises.

TEN YEARS AGO: No matter who the kitties are, they are always naughty. Audrey’s fondness for chicken has no diminished over the past decade. I found her nibbling on a cooked chicken breast cooling on the counter this week.