I was really glad to see the fog this morning after four days of above 90 temperatures. Granted, the new house is much cooler than the old one, which had no insulation and a peaked ceiling which trapped the heat, but after baking in high temperatures day after day and not really cooling off at night, there’s only so much you can expect. It was strangely still with no breeze, and it didn’t cool off at night. This is unusual for us.

I was also pleased to see St. Louis win the Stanley Cup last night. Hooray! It’s their first win of the illustrious Cup, and also had the pleasant side effect of snatching it from the evil Boston Bruins, who defeated the Leafs in the first round of the playoffs to my dismay and consternation. Just looking at the ice on TV was nice, too.

But most of all, I was happy to see my brother and brother in law arrive to unbox the ancient grandfather clock and get it set up in its new home. It’s off center because that’s where the wall stud is: 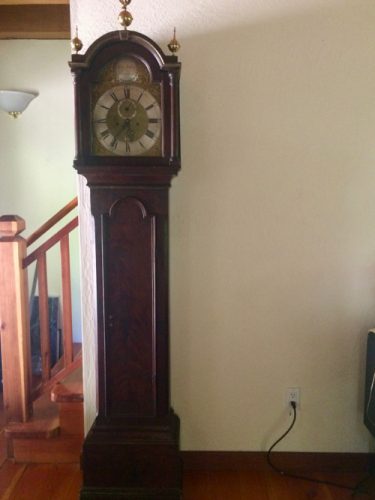 It’s also better for the clock to be as far from the heater (at right) as possible. I’m hoping to balance it out visually by hanging my big painting “Russian Hill” between the clock and the painting: 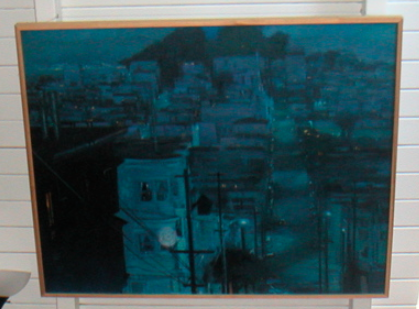 We took the Styrofoam and coffin pieces upstairs, where Rob put a ladder to access the storage space around the water tank on the third floor of the house. There was a light so Rob could see what he was doing, and the first thing he noticed was how cool it was, probably due to the water tank. Then he said that there was “enough room for a family of five” in there. Unfortunately, the front and back of the clock coffin were too wide for the doorway/hatch, so the boys ended up stowing them under the house until the next time I move, which I hope is never.

With the clock relocated, Rob’s bookcase was moved next to the sliding glass doors and my few remaining books placed in it: 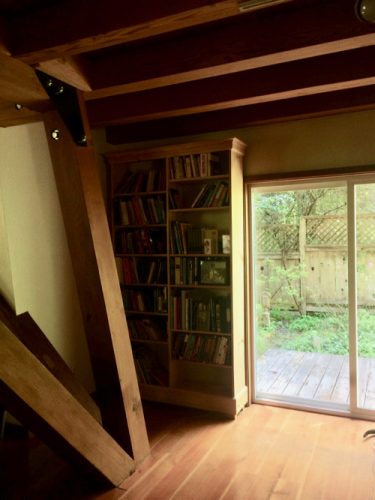 When I discovered that there was space left over, I regretted some of the books I had given away, but I should try to look forward instead of back. And focus on not accumulating more stuff. Lessons have been learned. The hard way, as usual.

Jonathan put my bed together while Rob was disassembling the clock coffin. An esoteric piece of hardware was lost in the moving process and could not be replaced locally, so Rob made one. I am lucky to have such handy brothers who are willing to help me out. It was nice to get the bed off the floor. I was also pleased to note that it’s much easier to sit up in bed now that I don’t have to position myself oddly in order not to hit my head on the curved wall/ceiling. Rio observed that living at my old house was living in an art project, and I think she was right.

So things are coming together at the new place.

A YEAR AGO: Wednesday and I weren’t feeling too well.

FIVE YEARS AGO: Wednesday was not at her best then, either.

TEN YEARS AGO: Life in Oakhampton was not very exciting.