A Rare Show of Togetherness

The cats seem as happy in their new home as the Staff is. They staked out their territory early. Audrey is Queen of the Couch, rarely, if ever, venturing upstairs, which is Boys Town. While she lounges on the couch, the boys lounge (and generally cuddle) on the bed. Much like human boys, they are happy with an unmade bed, but their Staff prefers the bed to be made and things to be tidy.

I placed two food dishes and a water dish in the spacious bathroom, along with the litterbox, which I cleverly concealed in the shelving unit there. I was surprised one day to note that both Dodge and Clyde were in the box at the same time, which seemed a little excessive in the way of togetherness.

Audrey’s dish and water are downstairs in her kingdom. It was soon brought to my attention that she did not care to go upstairs to use the facilities, so she now has her own inside the downstairs closet. I don’t love leaving the closet door ajar at all times, but it beats the alternative. Like I always say, compromise means nobody’s happy, though in this case, I’m pretty sure Audrey is.

The front door of the house is mostly glass, as is the sliding door in the kitchen and the door to the back porch, so I expected the cats to use those to look outside. Unfortunately for me, they prefer to sit in the windows, most of which have blinds which they walk through and disarrange. Fortunately, all of the windows also have screens.

However…I did not admit to the actual cat population when interviewing for the house. I only told my landlord about Audrey, who I expected to be the most visible and who might go outside eventually. Even to the owner of three cats, three cats sounds perilously close to crazy cat lady territory, and I didn’t want to jeopardize getting the house by admitting to it. So now I’m worried that she will notice them sitting in the windows and I’m not sure how to respond to that if it happens. I realize I should have told the truth in the first place and I brought it all on myself, but still.

The situation is further complicated by the fact that the landlord’s cat has been stopping by to visit (and, on occasion, leaving dead birds on the front porch). She is a beautiful cat, slim and white, with grey patches and extra toes, making her slim legs look even thinner with the big, bunchy paws. 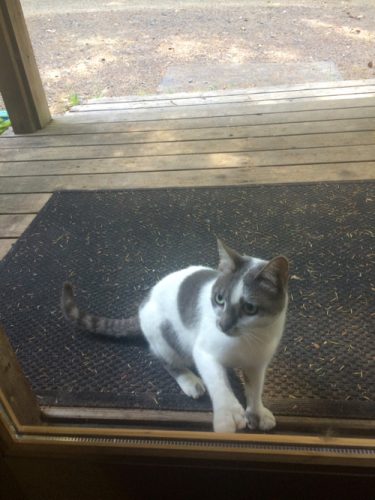 She is friendly and likes to be petted. However, Clyde and Audrey do not appreciate her visits. They both hiss and growl at her. I am always a bit shocked when Clyde does it, since he is usually such a cuddlebug. Dodge is completely uninterested in the visitor. Maybe he developed this laissez faire attitude while living on the mean streets of Fort Bragg during his formative years.

Maybe I’m worrying about nothing, though worrying is what I do. I’m (in)famous for it. Even seven year olds can tell!

A YEAR AGO: Some minor mysteries on the Ridge.

TEN YEARS AGO: Those naughty kitties!