My new appliances and I are getting to know each other. My lifelong record of having no dishwasher other than myself remains unblemished, but the new house has nice, deep double sinks and even one of those sprayers which are so great.

It took me a few minutes to figure out how to turn the oven on. The stove in the old place, which was a charming, apartment-sized old Wedgewood – lit with a match, but the new one is not so straightforward. Eventually I figured out which buttons to push to turn it on and set the temperature. Later, it beeped to tell me that the oven was at the correct temperature.

While the oven was warming up and stretching, I turned my attention to the somewhat intimidating washer and dryer. They look like you need to be a pilot to operate them, or at least have more than two brain cells.

Fortunately, they were up to this particular task, and I successfully got a load of laundry washed and dried, though not put away since the closet is still in chaos. It is a front loading washer and it seemed to take almost an hour to complete a load of laundry, which seemed like a long time.

In addition to the new appliances, I am also enjoying the novelty of having a house key* for the first time in over a decade: 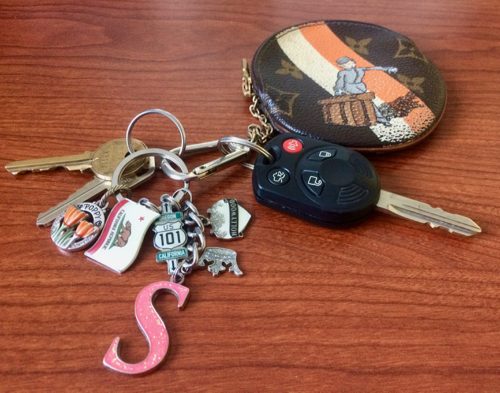 I have gone from having 5 doors with no keys to having three doors with keys. Even the sliding door in the kitchen has a lock. I find it quite satisfying to lock them before I go to bed at night, even though I’m sure I’m as safe, or safer, than I was at the old place. There is also a gate to the property which opens with a remote control or a key pad, which still kind of feels like magic and makes me feel even safer. So far, I am loving my new house.

*It’s lurking somewhere under all the bling and my post office box key.

A YEAR AGO: Feeling grateful for things big and small. I note that I wore the bracelet today.

TEN YEARS AGO: Ghosts in the machines.