It seems to be a universal truth that we all have more things and stuff than we think we do, and we find out how very wrong we were about that when the time comes to move. I thought I had a few boxes in the storage loft over the bathroom, along with the battered old white Christmas tree and sundry decorations. Imagine my horror when I discovered that there were TWENTY ONE – count ‘em, 21 – fun-filled boxes up there.

Going through them was a dust-filled extravaganza that brought up a lot of memories and not a few tears. I got rid of most of the books, including complete sets of the Dr. Dolittle books and Mary Poppins books, as well as all of my Miss Read. I sacrificed the complete collection of Trollopes when I left Oakhampton and I still regret that. I kept one box, which included my father’s childhood book Outdoorland and the Bible my grandfather carried with him when he went to fight in WWI. I also kept his letters home during the War.

I sobbingly threw out countless letters, cards, and postcards from family and friends, though I kept all of my father’s letters. I threw out so many photographs of people I didn’t know. I think they were friends of my grandparents’, but since I didn’t know who they were, off they went. The thought occurred to me that a few years down the road Jarrett or Jessica will be doing the same with the photos I saved.

I kept some color photos of my parents’ wedding, which I had never seen before, and a wonderful photo of my mother’s parents a couple of weeks after their wedding, marked with my grandfather’s hand, “US 8-24-’24”: 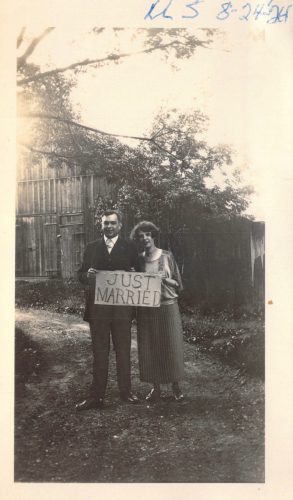 Also a breathtaking photo of my grandmother in the full flower of her youth and considerable beauty: 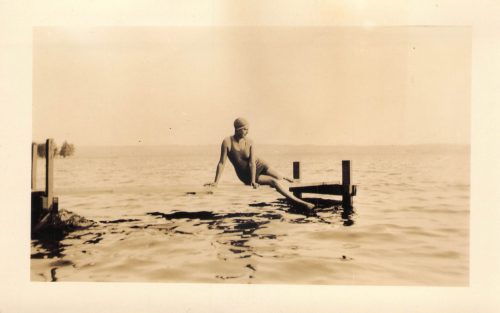 And a photo of my dear friend Alice* and me in her house in Amsterdam, just a couple of years after she stopped modeling. When I shared the photo with her, she noted that she was wearing Jean-Paul Gaulthier: 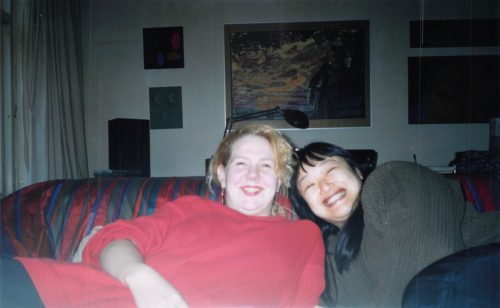 It brought back so many happy memories of the wonderful times we had together.

I ended up throwing out the old Christmas tree and only keeping my very favorite ornaments (I still miss the one Clyde broke). New house, new tree. I wonder if I had known this past Christmas was going to be the last one in this house if I would have decorated and celebrated instead of ignoring it. I guess a new house calls for a new tree and new traditions.

But for some reason, I was unable to part with the keys to my now million+ dollar apartment in San Francisco.

I told a coworker who moved here from New York about my travails, and she said that after clearing out two attics and a basement, she swore she would never put another thing in her attic. So far her attic remains empty, and houses here don’t have basements. Hopefully I can follow her example and not accumulate more things and stuff after I move. It’s hard to let go of the past, but maybe it can be liberating, too.

**We have been friends for 40 years now. We still email each other nearly every day. I am still thankful every day that she is still with us after that scare a few years ago.