Moving day – which also happened to be Megan’s birthday – dawned bright and clear. As I took a last carload of things and stuff over to the new place, I noticed what an idyllic morning it was. The ocean was turquoise, the meadows drifted with wildflowers and dotted with glossy horses and cows. I drove past farms and through groves of redwoods, across a narrow one lane bridge that I always worry about meeting someone else on, and arrived at the new house.

After everything was decanted, I went back to the old house. I imprisoned Audrey in the bathroom with her fuzzy bed and the boys in their bachelor pad, which is also known more prosaically as a metal dog crate filled with a comfy quilt.

Jonathan, Rio, and Rob soon appeared, and together we took a trailer load of junk to the dump before starting to load up the furniture. Back at the house, Rob started to construct the box for the grandfather clock to travel in. Then the boys carefully loaded it and wedged it firmly in place with Styrofoam (sorry, planet!) before placing a final sheet of Styrofoam over the glass front of the face.

The first load was the box springs and mattress, with the clock coffin riding on top. We got some strange looks as we drove at a majestic pace down the curvy country roads and briefly on the highway.

The next load included Rob’s beautiful bookshelves and the deconstructed bed. When my brother went to reconstruct the bed, we discovered that some crucial hardware had been lost in the process. I tried at the small Hooterville hardware store, but as expected, they didn’t have it. Of course all the other hardware stores were closed for the Memorial Day holiday, so I have just been sleeping on the box springs and mattress on the floor.

I was saddened to learn that I could not take my fan palms, Japanese maple, or camellias with me. I admit that I cried over them in the privacy of my car on my way to the new house after getting that news.

The last but most important load was the kitties. The boys shared a carrier, since they are always happier together, while Audrey had her own, since she is always happier alone. Happy is relative, however. She howled the entire 11 miles, while the boys didn’t make a sound.

I had been expecting that Audrey would poop in her carrier, since that is her usual MO when going to the vet. I was pleasantly surprised to discover that while she had peed, that was it. I was less delighted to discover that the boys had reacted the same way, so they were all running around with pee paws on the beautiful fir floors.

Clyde did not want to leave the carrier. I expected him to bolt out of it. I upended the carrier, and he was ejected by gravity, but immediately tried to climb back in, even though I was still holding the case upside down. He went and hid behind boxes. Audrey also vanished, while Dodge was Adventure Boy, leaping from box to box.

Here’s a peek at The Mess on Day One: 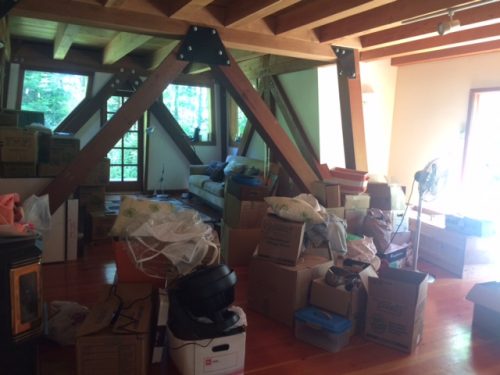 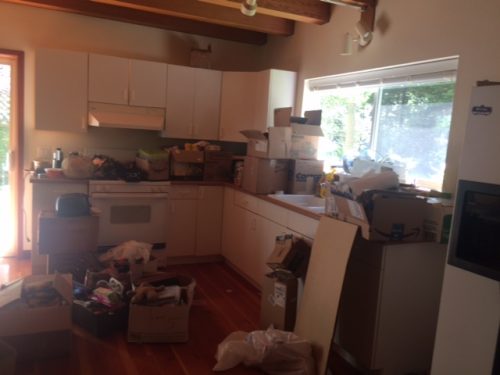 Impressive, isn’t it? You might be able to guess what my weekend plans were!