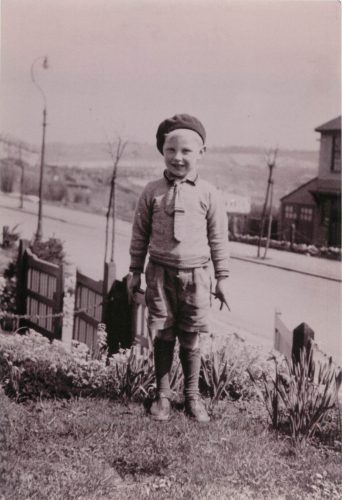 Wartime Dad on His Way to School

A friend noted recently that they had never seen such a family for cleaning our plates as ours. Thinking about the observation, I realized that this was true, and also that our behavior has its roots in WWII.

Our father grew up during WWII, being bombed and having food rationed, and the effects never left him. I believe that it also started him on the path to becoming a research scientist. His childhood home was heated by coal, and by the age of 9, he was experimenting with the coal dust at the bottom of the bin, seeing how much he could mix with other substances and still get some heat from the adulterated briquettes he made.

Rationing went on for about 10 years after the war ended and Dad stopped sleeping in a bomb shelter under the watchful eye of his hero, Winston Churchill, whose photo Dad had cut out of the paper. The photo was still there when I visited my grandparents in 1977, the year of the Queen’s Silver Jubilee. My grandmother used to tell the story of having to live with powdered eggs for years and finally getting a ration of fresh eggs, one per person. On the way back from getting the precious eggs, bombing began and my grandmother hid under a bus with her children and her eggs. She prayed for the safety of the eggs.

I am pleased to report that everyone, including the eggs, survived. But so did the effects of rationing, and they live on in this new (though not necessarily improved) century and from generation to generation. Like Dad, I am incapable of wasting food or leaving a light on in a room when I leave it. I sleep in darkness like he did after years of black outs and turn the heat off at night.

When I cook, I sometimes think of how I come from a long line of good cooks and how I still do things the same way my father and Victorian grandmothers did. I learned to cook from them and I still miss cooking with my father. I loved that we both knew each other’s kitchens so well and that we never got in each other’s way. Of course, having a glass of wine (or two) at hand inspires the cook, as Dad used to say. It’s nice to think that in some ways, they live on in me.

FIVE YEARS AGO: Being a dog aunt is fun!

TEN YEARS AGO: Rob’s hospital stay ended well (though not as soon as he would have liked).