The 100th anniversary of Armistice Day made me think about my grandfathers more than usual.

Both the Ernests fought in World War I in France. They may have even been on some of the same battlefields.

My mother’s father, Ernest Raymond, was a farm boy from New York state. I recently came across this photo of him in his uniform, setting off to fight in the war: 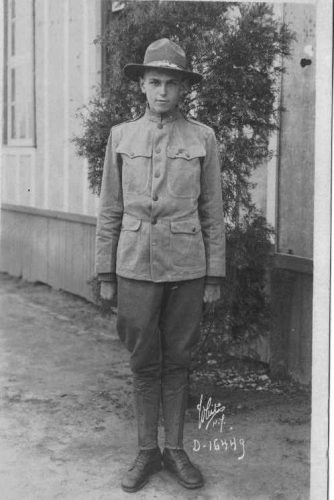 He looks like a kid to me, and he also looks like he is off on adventure. He clearly has no idea what’s in store for him. He told me that he saw his boyhood friends blown to pieces in front of his eyes, and that his feet rotted in the trenches. When the war was over, he got shipped back home as if nothing ever happened. It must have been surreal to go from the battlefield back to the farm. He survived it all, though, becoming a high school principal and having a long and happy marriage, living into his 80s.

I don’t have a photo of Ernest Victor from wartime. He was a tough young lad from a tough part of London, Southwark, which would be heavily bombed during the next World War. I happened to make a journey there to see his old neighborhood on what would have been his 100th birthday. It was pretty sketchy, with boarded up council housing, buildings with broken windows, and the old, disused railway stable. I’m sure both the council housing and stables are now multi-million pound condos. Gentrification is rampant and there are no bad neighborhoods now in central London.

Ernest Victor’s early life is something of a mystery, and will remain so since everyone who knows anything about it, including him, is long gone. His birth was registered by his mother, which was odd at the time, and was done long after his birth, also unusual. He never spoke to anyone in his family after WWI, except for his sister Elsie, who was very dear to Dad and to me. I have no idea why he cut them off like this.

He was gassed in the war and suffered from depression for the rest of his long life. He became an international banker at Lloyds of London, taking the train to the City from his home in Surrey. He too was very happily married for more than half a century and died on Christmas Eve, 1977, waiting in his special chair for his beloved wife to make him a cup of tea. Victorian gentlemen did not make their own tea.

They both went through a lot, survived it all, and rarely spoke about war and its horrors. I am thankful they survived and for their service, but sorry for all the young men lost in that war and the many to come.

A YEAR AGO: Car problems did not make me feel very thankful.

FIVE YEARS AGO: A late season BBQ with family and friends.

TEN YEARS AGO: Five year old Jessica already knew what to do in almost any situation.