Other than the Case of the Missing Landlord* and the plumbing mutiny, here’s what’s been happening in and around Stately Suzy Manor.

The Epic Dental Safari: I went to see my dentist after the hell of the root canal. It was supposed to be for a minor surface filling and to get the night guard**, but he decided to permanently seal the root canaled tooth first. As I now know, it’s never good when they talk about opening up the tooth and get that fascinated look on their faces. Also there is not enough nitrous oxide in the world to make it less unpleasant. Basically it was a mini root canal, as he took out the temporary filling and posts (who knew?) and replaced them with permanent versions while complimenting his colleague’s work. I will still have to get a crown in the new year when I get a whole new batch of dental benefits.

Speaking of which, the HR person was able to reduce my root canal bill by $200, which was a delightful surprise. Also, I learned that the pharmacy had been charging me incorrectly for the past few years, apparently not realizing that I have insurance. So I got a refund for the difference in cost for the antibiotics this month and will only have to pay $15 a pop going forward. So things are looking up in the dental and medical departments.

Dodge City: Little Dodge is flourishing. He now has a complete covering of fur all over his body, including his no longer rat-like but still very long tail. He is significantly less skeletal as well. He is enjoying his new lifestyle of constantly available food and water, daily treats, and lounging on the bed, which is his favorite place. He is both handsome and happy, which gladdens my Grinchy little heart. Here he is, hanging out on top of the armoire (aka Audrey’s throne): 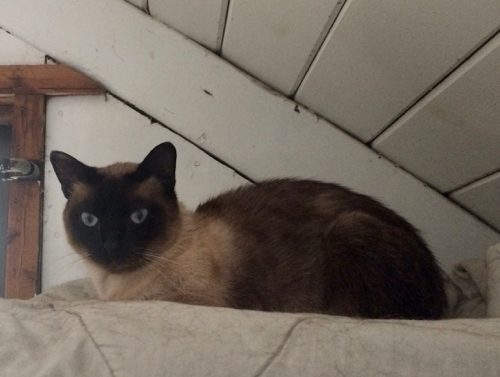 I’m still keeping him inside. He doesn’t seem to have much interest in the Wide World. Perhaps, like Henry Etta, he knows that no good comes of it and being inside is safer, warmer, and an all-around better place to be. Clyde continues his lack of interest in playing outside, and even the imperious Audrey hasn’t bothered with her early morning constitutional lately. Maybe Dodge will just stay an inside cat. I can revisit it when the weather warms up next year. By then, he will definitely know where he lives.

Dodge and Clyde have started playing together. I have seen them touch noses and even give each other little baths: 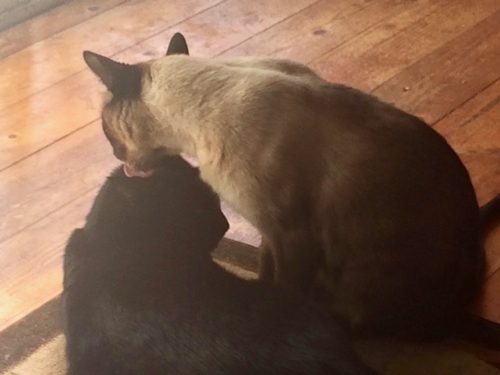 so they are on the road to friendship. Naturally, Audrey regards them both with the same disdain she applies to everyone. The empress is egalitarian that way.

*Where’s Nancy Drew and her blue convertible when you need her? As Marilyn approvingly observed in “:Northern Exposure”, “She’s competent.” Unlike me.

**He did have time to do those things, too. So far I have not been able to get used to the night guard, which makes me nauseous in addition to its general lack of comfort.

A YEAR AGO: A peek at the eccentric local message boards.

TEN YEARS AGO: Hanging out in Pasadena.