I took a couple of days off around the Labor Day weekend, and I am pleased to announce that nothing horrible happened for a change. Faithful readers may remember that when I took time off last Labor Day, it was about 5,000 degrees every day, and when I went to Eureka over the Christmas holidays to meet up with friends, I got the Flu from Hell.

So I was a little worried about what might happen on this long weekend – being a worrier – but nothing untoward occurred, unless you count going through the two blanket chests from Megan’s house which supposedly contained Depression glass, but in fact contained 100% junk. It reminded me of when my brother and I cleaned out Mom’s storage in Santa Rosa and found that it was mostly junk, including a phone book from 1982 and an empty answering machine box. It did not make me happy to know I had been paying for years to store Mom’s crap collection.

I have admit that I was hoping for some of Nana’s square, emerald green plates and dishes, like these: 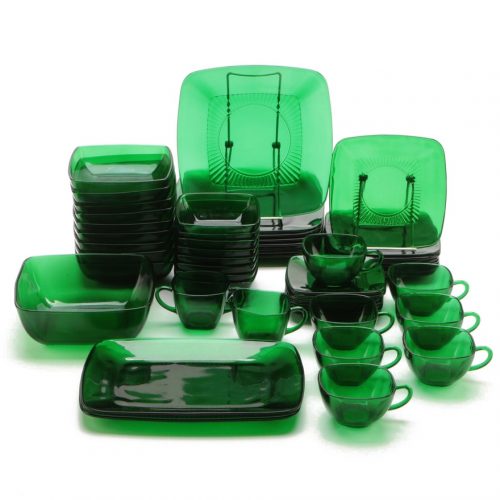 And in my heart of hearts, I was also hoping that maybe, just maybe, there might be a couple of the miniature creamers decorated with rabbits which we used to pour milk on our cereal at her house. Even though I never use milk. Such is the triumph of nostalgia over practicality.

Megan and Rob are out of their house and into their new home. It’s still hard to believe that they aren’t just down the secret path through the woods and huckleberry bushes. They are now in the throes of figuring out where to put everything. Unpacking is almost as much fun as packing when it comes to moving.

Our friend Carrie came up for the weekend with her daughter Miranda. It had been a whole year since they were here last! Erica and Jessica came by for a BBQ one night, full of plans to sell their property and move to British Columbia as soon as possible. I will miss them if they do move. At least we’ll see them at the Fair in a couple of weeks.

Clyde and Audrey are coexisting with Dodge. I think Dodge would like to play with Clyde, but it’s going to take a little more time. Audrey will continue to disdain the interloper like she does everyone else. As long as there are no fights and the older cats are happy, I’m happy.

Included in the adoption fee was a free exam at any local vet, so Dodge got the once-over from Dr. Susan*, Dr. Karen’s partner. She said in 30 years of veterinary practice, she had never seen a cat with markings like Dodge’s. She believes he is a pure-bred Siamese, and that he is very smart and curious. Here he is, exploring his new home: 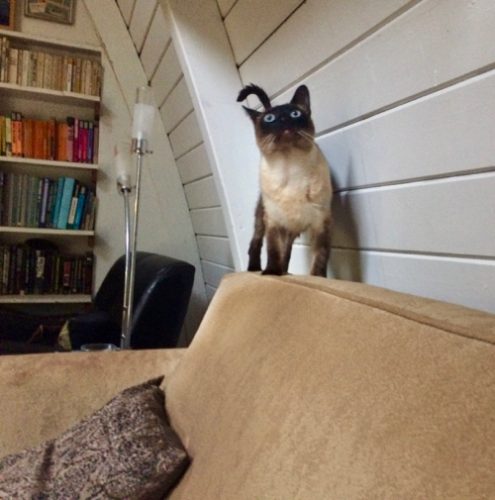 She was also impressed by how friendly and affectionate he is. So other than needing his fur to grow back and to put on weight, he is in good shape. She agrees that he is around two years old. I wonder what his story is. I guess we’ll never know, but it has a happy ending.

*He’s lucky he didn’t end up being a boy named Sue, considering all the Susans in his life: the one that found him, the one that adopted him, and the one who gave him a check-up.

A YEAR AGO: Having a great time with family and friends.

FIVE YEARS AGO: Lounging in the fabulous spa in Reno.

TEN YEARS AGO: Oh, Ray. I think I miss you most of all. In fact, you may be the only thing I miss about Oaktown.