There were some breakthroughs in Kitty World this weekend.

First of all, they were all on the bed at the same time on Sunday morning: 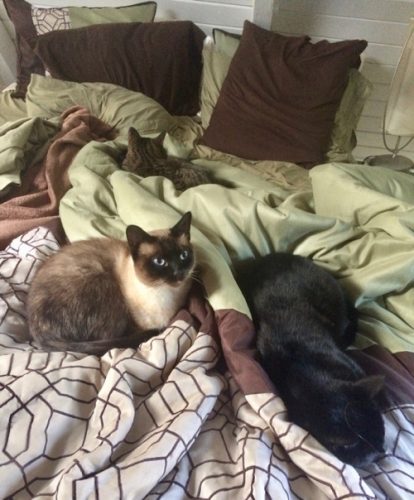 On the weekends, I like to take my laptop back to bed with my coffee, and the cats decided to join me. Of course, they only do this kind of cute thing when the bed isn’t made. During this temporary Sabbath détente, Dodge gave Clyde a bath. Well, he licked Clyde’s neck about three times and Clyde let him. Roscoe used to do this, and I always found it endearing. I wonder if Clyde was reminded of his long-lost brother or if cats just don’t think like that.

Lately I have been wondering what Clyde is thinking more than usual. A couple of weeks ago, a guy with a big, noisy truck came to take away scrap metal at Megan and Rob’s. It definitely made a racket, in addition to breaking the (old, disused, and graffiti-covered) water tower at the turn off to their house along with a couple of trees here and there.

Clyde was out playing at the time, and hours later, had not come home. Needless to say, I was panicking as darkness fell. I put on the outside lights and kept calling him, even though he knows perfectly well where his house is and calling him makes no difference. He showed up around 9:30, to my immense relief.

Ever since then, he has been pretty much uninterested in going outside. I am keeping Dodge in while he gets used to his new home*, but Audrey is being let in and out by doorman services. Clyde goes out and either turns right around and comes back in, or comes back in about 10 minutes later. He is hanging out in his clubhouse a lot (aka the storage space over the bathroom), but otherwise seems normal. I’d love to know if it’s because of the truck trauma or if he is trying to make a point of establishing his territory now that Dodge is in it. Maybe it’s something else entirely.

Whatever the reason, I think they were playing yesterday, chasing each other around the house. No growling, hissing, or spitting involved. Audrey does still growl at Dodge, but interestingly, he simply sits there peacefully and gazes at her with his big blue eyes. He doesn’t hiss or growl, but he doesn’t back down, either.

Dodge also learned how to use the cat door which separates the house from the studio/cat cafeteria/cat salle de bains. I’m pretty sure he had never seen one before and he definitely seemed to find it weird, but he figured it out. Such a clever boy! It seems the vet was right about him being smart and curious.

*This is a whole new worry: how and when to introduce Dodge to the Wide World. He is used to living on the streets in town, not in the woods. Part of me wishes I could just keep him in forever.

A YEAR AGO: A lovely evening at a historic inn, both past and present.

FIVE YEARS AGO: Nothing like having a subpoena home delivered. I’d rather have pizza, thanks.

TEN YEARS AGO: At the gym in unsuitable footwear. And on a stranger’s lap.

One thought on “Progress”