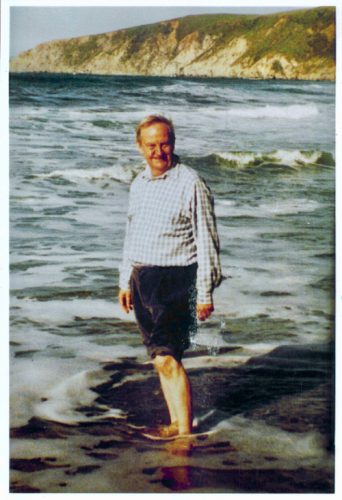 I spent the morning of the Evil Eighteenth cooking, as I often do. Something about Dad’s birthday and deathday seem to inspire me to cook, wishing he was there with me. We never got in each other’s way in the kitchen, which is a rare gift. I always liked the fact that we knew where everything was in each other’s kitchens, and where to shop for dinner ingredients, whether in London or San Francisco.

That evening, Megan and I met Lu and her daughter at the theater to see “Becky’s New Car”. You may recall that our last outing was a little less than successful due to the rather unpleasant subject matter. I am pleased to report that this play was both funny and delightful, and that the cast was wonderful.

The special drink for this production was an unusual and delicious mixture of pomegranate schnapps, ginger bitters (both new ingredients to me), fresh orange juice, and champagne. We toasted Dad with this delightful confection, saying “The old man wasn’t so bad”. I think Dad would have approved of the way we spent that day and remembered him.

We had toasted the old man the evening before as well.

Megan’s new home arrived earlier than expected, and was moved to its permanent location after camping out on the (fortunately wide and capacious) driveway on the property for about a week. Our brother cobbled together enough electricity to pop out the pop outs and power the lights.

Megan also popped out the champagne – Roederer, no less – that evening when Lu and I arrived to toast her new home as well as the old man. The dogs are already feeling pretty much at home, though the household is in the awkward phase of being between here and there. Star and Stella were happy to flop on the couch: 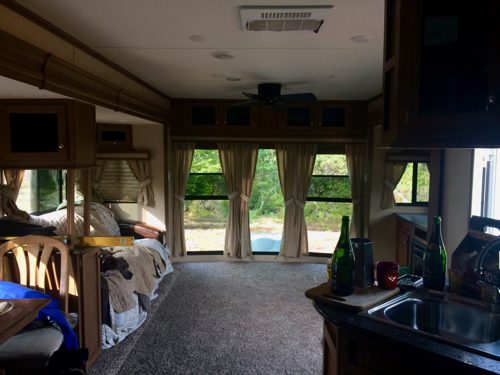 Dad would be happy about that, too. Maybe we will start to think of this time of year being about happy new beginnings as well as sad endings. As the years go by, I feel less anger and sadness about losing Dad and more happiness that I had such a remarkable father who was also my best friend. The good memories tend to come to mind more than the sad ones. Though I will always miss him, I was lucky to have had him at all.

A YEAR AGO: Enjoying a drink and the view at my favorite seaside bar.

FIVE YEARS AGO: How to make the world’s most expensive peach pie.