Today the air was smoky as well as foggy. Surprisingly, it’s the first time it’s been smoky since the wildfires began in late July. The forecast calls for a shift in the wind tomorrow to clear out the smoke. The Mendocino Complex is now the largest wildfire in recorded California history. My heart aches for our inland neighbors, going through this yet again after just a few short months.

So far, we are safe here on the coast. We are all working together to get Megan and Rob ready to move – next Saturday! Even though their current home is on the small side, there are many things that will not fit in their new abode and are being rehomed. One of these was a rather battered dresser which had been Megan’s since she was a kid: 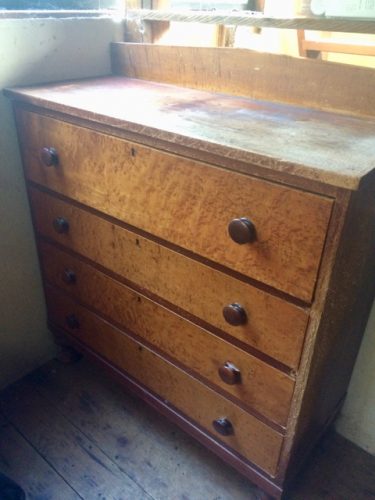 It was worse enough for wear that she decided to give it away. I listed it on the local message boards and it was snapped up in about an hour by a guy who lived right down the Ridge. When he came to pick it up, he told me that he had helped James to bend the redwood to make my house’s distinctive shape.

Despite the diminutive size of Megan’s house, there seems to be a lot of stuff be sorted and disposed of. That’s what happens when you live in one place for 20 years. Megan observed that this is the only house she has lived in as an adult. She went from living with me during high school to living on a boat at Pier 39 to living in this house.

This is also the last of our homes where our parents spent any time. Dad visited there often, including the time he had a stroke between Megan’s house and what was then Jonathan’s house. He recovered, but died nine months later in London of medical malpractice. Megan’s house is where our mother spent the last few years of her courageous battle against breast cancer. We celebrated many Thanksgivings and Christmases there. When Megan closes that narrow front door for the last time, she will be closing the door on a long chapter of her life and many memories.

A YEAR AGO: A visit from our friend Carrie and a passel of quite excellent teens. They are coming back for Labor Day weekend!

FIVE YEARS AGO: Clyde’s encounter with the slobber monster. He seems to have avoided it ever since, and it had better stay that way. The fur where the injury was is notably white against his black fur.

TEN YEARS AGO: The walk in pharmacy and other Oaktown delights. I do miss Ray the Safeway guy, though.