I am happy to report that I am sitting in bed with both cats at the luxurious hour of 8:00 am. There is no Evil Death Star blasting through the skylight and blinding me. Also I am actually wearing my bathrobe (the old red fleece one from the Gap that I have had since I lived in San Francisco, incredibly enough) and sitting under the comforter. Huzzah!

Last night it was a mere 70 degrees in my living room as I watched The Man Who Cheated Himself and drank lemonade with raspberry vodka. The movie was filmed on location in San Francisco in 1950, and it was fun to see my old hometown and guess at the locations, seeing what has changed and what hasn’t. I have to say that Lee J. Cobb made as unlikely a leading man as Jane Wyatt did a femme fatale, but it was still fun to watch.

Today I did a little gardening and a lot of cooking. When I was finished with these tasks and settled on the couch with a baseball game on, I got an email telling me that my DNA results were in.

Despite the tragedy that struck Erica, and the ensuing memorial service right before our birthdays, Erica bought me an Ancestry.com DNA kit for my birthday. She knew that I have been wanting to do this for some time now, but found the cost prohibitive. She really is like another sister. I sent it in the day after I received it, and here’s what they say is my heritage: 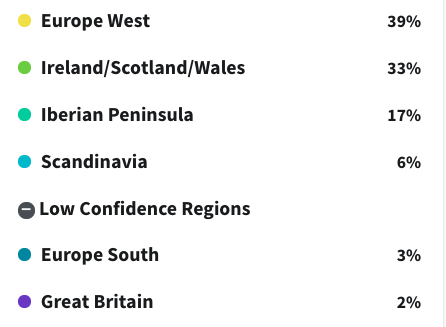 It’s not very surprising, other than the high percentage of Iberian Peninsula. I wonder if that is on my mother’s side, since we know absolutely nothing about her birth parents or any of her ancestors. Mom never cared about who her birth parents were, feeling that her parents chose her out of all the kids in the world, and they were the ones to raise her and love her and travel through life’s journey with her.

I always accepted this, and I could not love my grandparents more, but over time I have come to wonder about the girl who gave birth to Mom and felt that she had no choice but to leave her on the steps of an orphanage one spring day in 1932. I now realize that she was most likely heart-broken, possibly in a really bad situation, and probably wondered for the rest of her life how her little girl was.

The DNA results also told me that I have very, very distant cousins who also sent in their DNA. I have to admit I was secretly hoping that Mom’s birth mother had other kids, and that they in turn had their own, and we would find each other and the mystery – or at least part of it – would be solved. I will just have to accept that I will never know.

A YEAR AGO: A blissful sleepover with Jessica. So much fun in such a short time! We are overdue for another one.

FIVE YEARS AGO: Man, everyone was sick! Megan had the flu, Clyde had a Mystery Illness, and Jessica broke her leg. What the hell? What the heck?