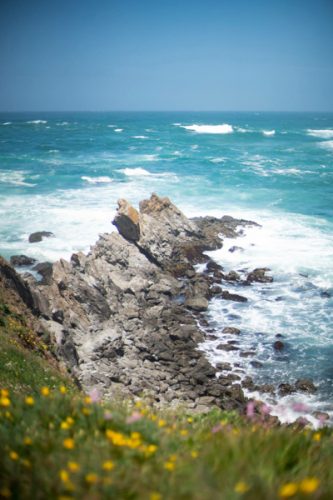 It was a postcard day as Megan and I headed to Point Arena and points beyond. I’m always happy to be chauffeured by my little sister, especially since it gives me time to admire the passing scenery, which was definitely scenic. It was a beautiful day, like a postcard, the sea deep blue with lacy white waves. The fields were full of wildflowers, white, purple, pink, and orange, and wild pink roses tumbled over old wooden fences. The cows and sheep have babies. The hills have turned “golden” as we move into summer.

We went to Franny’s Cup & Saucer in Point Arena, about an hour’s drive from Albion. Franny’s is run by a former pastry chef from the famous Berkeley restaurant, Chez Panisse. As you would expect, they make wonderful confections: 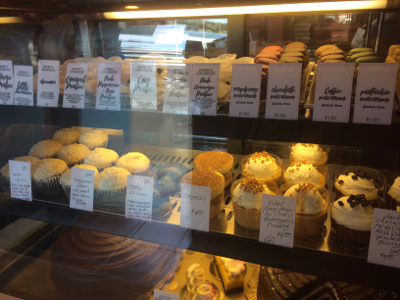 As you would not expect, they also sell various cute things, which often end up in our Christmas stockings. I got a couple of cute things for Erica’s and Jessica’s stockings. I don’t really have anything for the stockings this year. Usually, I have a few things by now. I’m afraid I may have outdone myself last year and perhaps set the bar too high for any future stockings.

I also chose a wonderful piece of cake: dark chocolate cake, apricot jelly, sea salt caramel cream, and dark chocolate olive oil ganache. It was light as air and just divine. Megan and I both got mini pizzas with sausage, asparagus, red onion, and brine-cured olives to have for lunch at the play.

With our Franny’s provisions stowed in the car, we headed further down the south coast to Anchor Bay, where we got Thai food for dinner. Then we went back to Point Arena to see the National Theatre of London’s production of “Macbeth”. There was a short introduction by the director, who said that this version of the Scottish play was set in a place where there had been generations of civil war, which he felt made the characters’ motivations and actions more understandable. It was also set in a sort of dystopian semi-future, and I never respond well to that kind of thing. The sets were certainly cleverly done, but I found them and the costumes to be jarring, especially in contrast to the language. The acting was great, though. Megan did better with the innovations than I did, maybe because she’s younger.

When I was, say, 15 and she was 6, the age difference was huge. Megan would always say, “I’ll catch up you, you’ll see!” She certainly did.

A YEAR AGO: You never know what you’ll find at my house. Could be a giant, unexpected refrigerator. Or a woodpecker.

FIVE YEARS AGO: Remembrances of summers past

TEN YEARS AGO: The eternal glamor of Miss Audrey Hepburn.