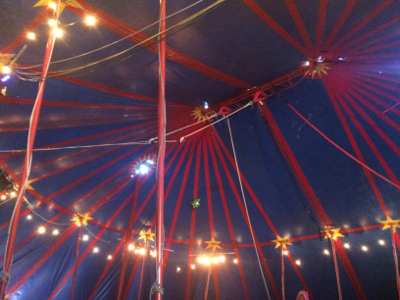 I was glad to see the red and white striped tent appear in the Village, since it could only mean one thing: Flynn Creek Circus was back in town!

Megan and I had bought tickets well in advance, and when the day arrived, we were both in somewhat bad moods after a long week and unpleasant financial news for both of us (if you think you can’t be any more broke than you already are, surprise! You can!), so to tell the truth we didn’t really feel like going. But I’m glad we did, because the wonders of these artistes banished all our cares and blew what was left of our minds.

Megan’s parking karma held as we parked nearby in a location from which we would later make a quick getaway while others were struggling to make their way onto the highway. As an added bonus, her headlights worked, so we didn’t have to annoy our neighbors by driving home with high beams.

The tent was crowded, and in the way of small towns, one of my co-workers was sitting in front of us, and the latest in the long series of CEOs of the jobette was seated behind us. He didn’t know that I knew who he was. Unfortunately, he was with a posse of his rich, entitled friends, and they proceeded to talk through the entire performance, with Mr. CEO constantly screaming “Woo!” and “Yeah!” into my aching ear. If the show hadn’t been sold out, we would have moved to escape the endless audio onslaught.

Despite that annoyance, we focused on the show, a new one which took placed on a ship captained by a sparkly mermaid:

It started with graceful knife throwing and juggling, followed by a girl who balanced a hula hoop on her head while spinning others on her arms and body. It’s like the laws of gravity do not apply to Flynn Creek Circus.

The Daring Jones Duo did their amazing trapeze act: 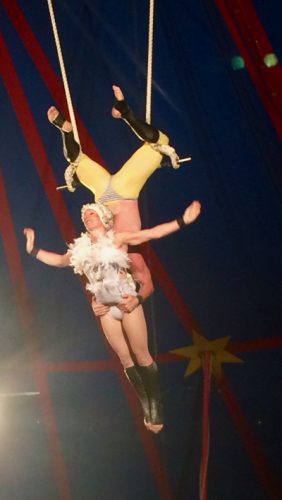 If you’re wondering about the feathers, they were dressed as seabirds visiting the ship. And this sparkling artist performed aerial stunts far above us: 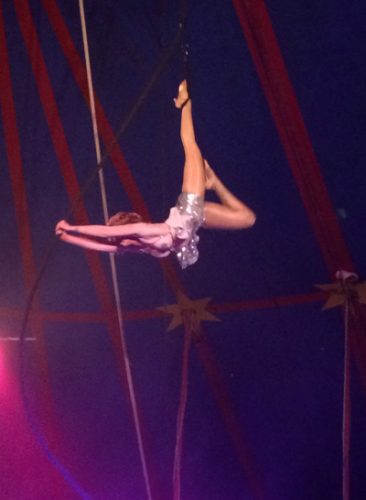 Possibly the most amazing part of all the amazing acts was the guy who was not content to merely walk a tightrope. He also did somersaults, flipped backwards, and spun in the air, then landed on the narrow rope. I found a brief video to give you an idea of the wonders.

There were also three gravity-defying artists who sort of bounced sideways off a rubber wall and landed on top of it, or seemed to sort of be suspended in space, or bounced mind-bogglingly high. It’s hard to explain but was enthralling to watch. You can see a little bit of that in the video, too.

When the magic was over, the artists formed a receiving line at the exit so we could shake their hands and tell them how amazing the show was. It was a nice personal touch. All in all, yet another wonderful evening at the unforgettable Flynn Creek Circus.

A YEAR AGO: A less than stellar day.

TEN YEARS AGO: The glamorous lives of the wealthy (in novels). Not me (in real life).