I am coming to you from my couch, instead of my office, where just this Monday I was surprised by the unexpected appearance of beach lavender in my sea urchin dish: 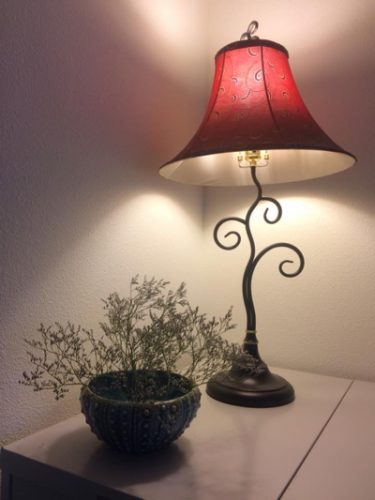 Beach lavender was a new flower to me. It’s like upscale baby’s breath, with little purple flowers. I also found a bag of still-warm chocolate chip cookies on my desk, so as Mondays go, not too bad.

Except for the horror of my lower back pain.

The LBP started on Sunday, when I was on the phone with our good friend Paul. You will be glad to hear that he is doing just fine, and that like every other summer for the past 20 years, this will be the last one he will work in the Hamptons. Suddenly, my lower back made its displeasure known, and after I said goodbye to Paul, I took to the couch with the heating pad.

On Monday, I went to work, even though getting dressed was an adventure and I kept praying that I wouldn’t have to brake, since lifting my leg to move it to the brake was so uncomfortable. I made my crab-like way through the day, but the back spasms were horrible by the time I got home.

It soon became clear that getting in and out of bed, not to mention turning over once I was in it, were no longer possibilities. So I have moved operations to the couch, where I have been ever since, equipped with heating pad, lots of pillows, the fascinating Victorians Undone, and the delightful reboot of Will & Grace, which thankfully undoes the egregious errors of the final seasons, so that Will and Grace are child-free and Stan is still around, though we still have to endure an appearance by the ever-awful Minnie Driver. But Karen is still rich, married to Stan, and gloriously Karen.

So I have missed two days of work due to illness, which makes me feel guilty, especially since I just had the horrible cold from hell about a month ago, and the worst flu in 20 years 6 months before that. I feel like I’m falling apart.

I have been keeping up with my emails, both work and personal, and thus learned of the loss of my former mother-in-law, Marj, seen here with John’s Dad Ed at their lovely home on Sharbot Lake: 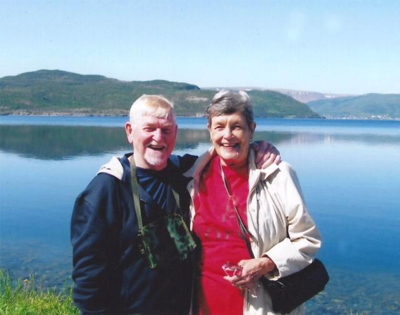