If it’s Saturday, it must be scorching…

The last two Saturdays in a row have been hot’n’heinous, reaching 90 in my bijou residence. And that’s downstairs, where the propane heater gives a readout of the room temperature. It was still 86 downstairs when I went to bed upstairs in the sleeping loft, cursing James’ genius idea of having the balcony door face west, where it can get as much sun for as long as possible, especially during the hottest part of the day. What else would you expect from the guy who put in light switches that say NO when you turn them on?

My survival plan now includes hanging a dark sheet up on the balcony door, white-trash style, in the hopes that it will give a little shade and maybe help with the heat party, with the hot air rising up to the pointy ceiling and hanging out there: 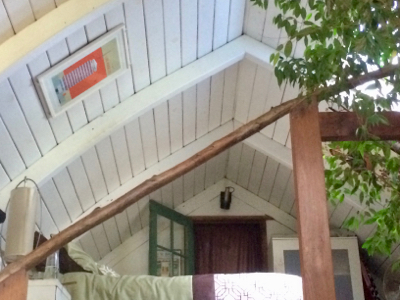 I am also leaving the sliding glass doors downstairs open with the screen closed to keep the kitties in but allow the mythical cross breeze to come in once I take the trashy sheet down at night.

Do I have to move to Alaska? Look out, Tim, you may have a new neighbor!

When I was a kid, Saturdays were for cartoons. Our parents severely limited our TV time, but I seem to remember being allowed to watch cartoons. Mom slept in, and Dad drank his black coffee, read the papers, and did some writing for work while the electronic babysitter kept us out of his thinning hair. I now realize that I pretty much do the same thing on weekends that Dad used to do, drinking my black coffee while reading and writing, awake but not doing anything yet, not wanting to talk to anyone as I slowly wake up.

Now I don’t watch cartoons, but sometimes the cartoons come to me, mostly courtesy of Clyde the little outlaw.

One weekend, he brought a bird into the house. I hate it when the cats* catch birds, and always interfere if I’m home. As always, he carried his prey up to sleeping loft (why?) and before I could get up the stairs, the bird managed to escape the jaws of death. Unfortunately for the bird, it flew into the wall above the kitchen sink, which it then fell into. Fortunately, it flew out of the sink and into the great outdoors, hotly pursued by Clyde as it vanished into the sky.

It really seemed like a cartoon: Zoom! Bang! Plop! Whir! And it all happened in seconds.

Moving up the food chain and out of season for Easter, Clyde’s next weekend import was a bunny. I managed to get the bunny away from Clyde, who I banished to the bathroom (aka the only room in the house with a door) while the bunny ran under the couch.

I had a hard time persuading the intruder to leave, possibly because Audrey was present, though she was completely uninterested in the whole thing, other than thinking that Clyde should always be shut in the bathroom. Eventually, the bunny hopped out from under the couch and out of the door, but he was much slower than I thought, which probably explains why Clyde was able to catch him in the first place.

Once again, it seemed like something out of a carton, and it all happened much more quickly than it took to tell you about it. Never a dull moment out here, I tell you!

As Audrey approaches her 11th birthday (!) next week, I realize that she no longer really hunts. I can’t remember the last time she imported wildlife into the house. Maybe it’s getting older, or maybe it’s just beneath her considerable dignity.

A YEAR AGO: Junapalooza! I miss you!

FIVE YEARS AGO: Getting divorced. I see it was hot then, too. Maybe the climate changed a long time ago and I didn’t notice?

TEN YEARS AGO: The horror of wildfires. And knowing my brother was out there fighting them.

One thought on “Hot Times”