The calendar may say April, but the weather says otherwise. On Friday, I made my way to work through the government-mandated darkness in what was probably the worst storm of the season. The car-eating ditches bordering the Ridge had long since flooded the roadway, so I drove at an extremely sedate pace down the middle.

Visibility was pretty poor, so I kept to a snail’s pace even after reaching the highway. This turned out to be a good decision, since I came around one of the many curves to find a rock slide and what appeared to be the root end of part or all of a tree in the road. Some of the rocks were positively boulder-sized.

It didn’t take long for the Road to Civilization to flood and close. No more tourists for a while!

The local message boards were abuzz with rainfall totals over the 24 hour period, ranging from 5.5 to more than 6 inches. And it just kept coming. My hippie hovel sprang a couple of new leaks, and the Lone Tulip of the Apocalypse was unable to weather the storm: 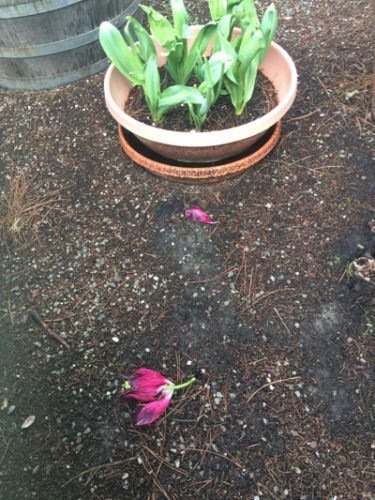 We are slated to get still more rain this week. It seems the Groundhog was correct and then some!

A YEAR AGO: Family dinner with a special guest star.

FIVE YEARS AGO: Something beautiful for everyone.