I am pleased to report that the mattress nightmare is finally over!

Like particularly capricious dates, they kept standing me up at the last minute. This happened twice. The day and time was set, and then the night before, I’d get a call saying something had come up and they couldn’t make it after all. Each time, they would defer the fictitious pick up to the following week.

The first time this happened, I was annoyed. The second time it happened, I was enraged. Like the great Ramona Quimby*, I made a great big noisy fuss (though unlike Ramona, I did it via email rather than in person). I didn’t expect anything to come of it other than relieving my feelings, so imagine my surprise when they contacted me to tell me that the pick up was going to theoretically happen a mere two days after it was supposed to, instead of ten days. They also refunded all the money on the spot, which may have been the most surprising thing of all.

The date selected was Saturday, which also happened to be the day after the giant storm, or “atmospheric river”, as the weather men call it. So that made me even more dubious that they would show up.

I went about my regularly scheduled cooking marathon (braised chicken with goguchang; smothered pork chops; curried chickpeas), and much like lighting a cigarette at a bus stop, they turned up in the midst of it all, announced by Mark’s herd of canine doormen. Once again I had to convince the delivery men that the dogs were all bark and no bite.

It didn’t take them long to remove the mattress and be on their rainy way. I felt like a curse had been lifted from the house. I temporarily abandoned cooking operations and went upstairs to unfurl the new and hopefully improved mattress and leave it to puff up and recover while I finished the cooking.

Later, I went back upstairs and made the bed. I discovered that what I thought was a pair of pillow shams was in fact only one, so I ordered another one and used the old ones for now. I also discovered that they new sheets I ordered were not quite the same green as the new comforter set, but that’s the hazard of ordering online. They are 800 thread count, so they feel great, and with the bed all made up, you can’t really tell that they aren’t the right shade: 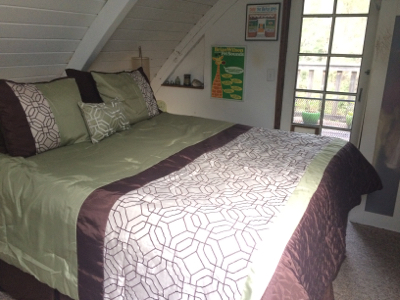 The new mattress also feels great, being a pillow top memory foam. It has the cloud of bliss feeling I was looking for. Thanks to all of you who recommended memory foam. I should have asked you in the first place, instead of relying on my ever unreliable judgment. It does make me wonder, though, how one mattress can possibly be worth about a billion dollars more than another. In this case, the cheap one felt a billion times better than the super expensive one. Maybe I’m just a cheap date.

*I am delighted to note that Ramona’s creator, Beverly Cleary, just turned 102 yesterday!

A YEAR AGO: A rather wintery spring.

FIVE YEARS AGO: A busy but happy Saturday.

TEN YEARS AGO: Meetings and music.