Decision-making is not my forte. I tend to wait until a course of action becomes inevitable and then just go along with it, like the artist Edgar Degas, who believed we were all just “corks* in a stream” and that life was just a random series of events.

If I do make a decision, it almost always turns out to be the wrong one. You know, like getting married. And selling my apartment for a pittance just a few years before it was worth well over a million dollars. And moving to Oaktown. I could go on, but you get the gist. What was I thinking?

In my finite wisdom, I decided that it was time to replace my ancient Ikea mattress. In my defense, I have had it well over a decade, which is past the normal lifespan of a mattress, and resorted to mattress pads and a featherbed to make it more comfortable. I did a fair amount of research and settled on one that had new technology and rave reviews. I confirmed that they would deliver to what my beloved stepmother used to call “the back of beyond” and that they understood how long it would actually take to drive here from the Bay Area.

It also cost about a billion of my hard-earned dollars, but I had decided – there’s that word again! – that it was an investment in better sleep and hopefully an at least marginally improved Suzy.

So I was pretty excited.

Delivery Day arrived, and the truck pulled up within its delivery window. Its arrival also released the hounds, and it took some persuading to get the delivery guys to get out of the truck and into the midst of Mark’s flock of enthusiastic and enthusiastically barking dogs. The dogs failed to eat the delivery guys, living up to my claim that while there was considerable bark, there would be no bite.

They dragged the heavy new mattress upstairs, removed the old one, and went on their dog-free way back to Civilization.

I couldn’t wait to make up the new bed with the new comforter set I had bought for the occasion, which as you can see got the Audrey seal of approval: 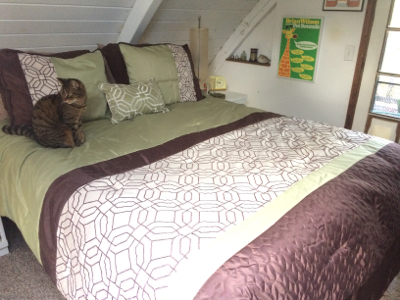 Audrey’s opinion is always important, but since she spends most of the day on the bed getting her beauty sleep, it’s especially important when it comes to new bedding.

With promises of fabulousness dancing in my head, I got into bed under the Audrey-approved covers, and…meh. Rather than the cloud of blissful comfort I expected for the exorbitant price, it was unyielding and implacable, much like Audrey herself. I did not wake up notably more refreshed, or wake up less, either. Nor was it a haven of bliss.

I have to admit I was pretty disappointed. Yes, it met my usual goal of less crappy. It is much less crappy than a decade old Ikea mattress. But it also cost about 100 times as much, and is not 100 times better. And I spent a bunch of money on something that is not wonderful. I steeled myself to spend the money to indulge myself in a luxury, and it’s not. All that money and no enjoyment.

I have 100 days to return it, but now my decision deficient mind has to decide whether to keep the horribly overpriced yet utterly underwhelming mattress, ort search for another one when I have lost what little faith I ever had in my mattress buying acumen.

The entire process is additionally hampered by the fact that the delivery guys took away the old mattress, so if I do get another one, I have to do it before I convince the delivery guys to risk life and limb to come back and pick up the expensive mattress. No matter what I do, it’s going to be a hassle. And whatever I decide will undoubtedly be the wrong thing. Maybe I should be like George on Seinfeld and do the opposite of my instincts, and everything will turn out fine.

As so often happens in life, none of these options are appealing. What do you think? Some of you must be better decision makers than I am!

*It turns out Degas was something of a cork expert, or at least a cork aficionado, since he stuffed his statues with used wine corks.

A YEAR AGO: The local message boards were all aflutter about birds.

FIVE YEARS AGO: Almost time for Dad’s birthday. I still miss him so much, even after 17 years!

TEN YEARS AGO: It looks like I was counting down to the Sex & the City movie, but the post is having technical errors.

One comment on “Once (or Twice) Upon a Mattress”